I did it! NaNoWriMo ends tomorrow, but I’ve reached 50K and simultaneously the end of my story today! I’m now an official NaNoWriMo winner and I have the certificate to prove it.

I wrote a book! Can you believe it? I know some of you doubted it, but … I’m just kidding. You guys have been crazy supportive all through NaNoWriMo and I’m incredibly grateful for that. So, before I continue to talk about the final week of writing I want to thank all of you for being the awesome and supportive people that you are!

Now, how did the writing fare this week? I think I went totally crazy towards the end. You have to know that I write best shortly before going to bed, because I feel the need to reach my daily goal. This has worked just fine most days, but I tend to finish with a scene, turn off my laptop and go to bed and then I would just lie there, not able to sleep whatsoever. My characters kept me awake with all the possibilities of what could happen to them next. I do have a notebook right beside my bed, but I always had the fear that I wouldn’t remember what my notes meant the next day and rather turned on the computer sometime after midnight than forget what I wanted to write about.

Writing the actual ending was the hardest. I’ve made up so much of the story as I went along, that I lost sight of how I wanted it to end. I got closer and closer to my desired word count, but the finish line still wasn’t in clear sight, because I just didn’t know what to write. In the end, I knew that I wanted to have some final reference to the title (which is “Break Up Buddy”, just fyi), but I had no idea how to get there. I’m not a big fan of cliffhangers at the end of books (unless they are a series), so I wanted to tie everything up nicely and in the end I think I did that.

Also, I think I went a little overboard with the final scenes, but that’s okay, because what matters most is that I have a finished first draft! I really wasn’t sure I would make it this far and now I have something to work with, something to revise and edit. To be honest, I already forgot some of the scenes I wrote and it will be one heck of a fun to re-read and re-visit everything I wrote, because I’m sure there are some hilarious typos and plot holes in there.

Now, how did your month go? Did you participate in NaNoWriMo as well? Did you reach your personal goal? I’d love to talk some more in the comments below! 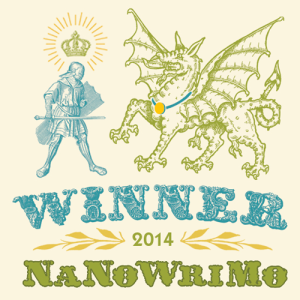 If you want to read more about my journey during this month, click on the links below: