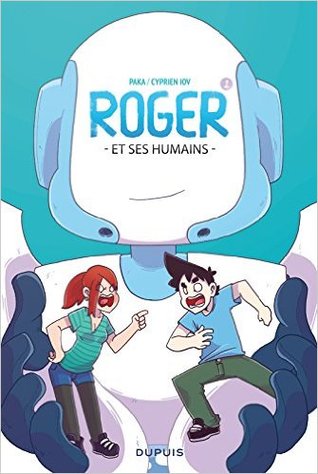 Hugo is a young man, spending most of his time on the internet or playing video games. He suddenly finds his life drastically changing when someone leaves a robot with artificial intelligence at his door. Hugo assumes it’s a birthday present, but everyone seems to have forgotten that that was happening anyway. Still, the robot called Roger soon becomes part of their life. But where does he come from and why was he brought to them?

So, wildly translating the title, the comic book is called Roger and his Humans and if I understood it correctly was drawn by Paka and thought out and written by Cyprien Iov. You may wonder why I am coming at you with a French comic book, right? I am Austrian, so my first language is German and I usually just write stuff in English. Where am I getting at? Well, let me start at the beginning and prepare for this to get way more personal than a regular review!

I didn’t go to a regular High School, I went to a school for Tourism and Economy. We had all our classes 50% in German and 50% in English and then we were expected to learn another foreign language as well and I chose French. I had already studied it for a little bit, but the school was really demanding and we basically were supposed to be able to talk about the financial crisis in French. After my semester abroad in the US, my French suffered more than just a little. I wasn’t terrible, but I also wasn’t very good. I spent a summer in a small town in the Provence, working there in a hotel. I thought that it had helped with my language skills at least a little bit, but my teacher didn’t think so. After a couple of really terrible semesters, mainly due to this teacher who made my life miserable and me almost failing the class, I had no fun with the language any longer.
But I wasn’t ready to give up on it that easily! I had spent about 7 years studying French and wasn’t just going to throw it all away. Instead, I turned to the internet. I found a couple of French comedians and YouTubers who put their sketches online and with that I regained some love for the language. The videos were short enough and not spoken too quickly for me to understand them just fine! I even shared them with some of my friends and we soon had our own inside jokes about those videos. Well, one of the YouTubers I was instantly taken with was Cyprien. Watch one of his videos (Technophobe) that has gotten a lot of buzz this year to get a better picture of where I am coming from. (You can turn on the English subtitles, I hope that works for everyone who doesn’t speak French.)

Now, finding out that he was publishing his first comic book, I simply had to have it. I gushed about it to my parents and lo and behold, they got it for me for Christmas (even though it only arrived December 31st before noon). I was so happy and I practically tore through it. I guess this is the part where actually review the story!
First of all, I really liked the way it was drawn. Sometimes the story is just fine, but you are not actually all that taken with the drawing style of the artist (*cough* Kingsmen – The Secret Service, I am looking at you! *cough*), but that was definitely not the case here. I loved the cute look, especially paired with some quite literally murderous comments of Roger.
It all starts out with short scenes, not yet giving you the overall picture of the storyline. I was wondering if it was mostly just short sketches, summed up in 3 pictures or so, but the longer you stuck with it, the more you understood the connections. In the end, it was hilarious and a great start to a series. You got to know all the characters and while the most important questions were answered, you still have some more to explore in the future. I don’t even think there is much more to say, because I would rather have you explore it yourself!

Fazit: 5/5 stars! I guess there was no way around me loving it! I want more!

So, that was an easy start for my January TBR! Have you ever heard of Cyprien or this comic book? And on another note, which languages are you speaking and did you ever struggle like I did?