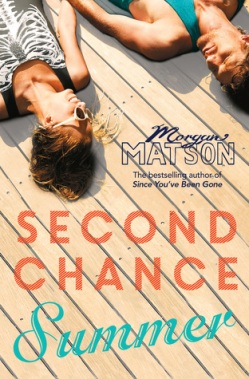 I read this book (sort of) together with Marie @Drizzle and Hurricane Books. Our schedules didn’t work in our favour all that much this time, but we at least read it in the same week – yay to us! It’s always a blast to read with her and it’s even greater to have her to discuss ideas and theories about the book with. Make sure to check out her review in the near future!

I am a declared Morgan Matson fan, so before the new release of her latest book (The Unexpected Everything) I just HAD TO read Second Chance Summer and I do not regret that choice. The premise is fairly straight-forward, so I had a rain-cloud hanging over my head ever since page one. This is a book that had me in a sobbing mess by the end, but I am getting ahead of myself.

The book is, as the title suggests, about second chances, but in more than one way since it’s actually “split” into two stories. On the one hand, you have the family plot, with Taylor having that last summer to spend with her father yet also growing closer with the rest of her family. It was my absolute favourite part of the book! It is so very rare in YA fiction that parents or siblings play such an important role, that you get to know them just as much as you would the MC’s best friend or love interest in any other story. So, I am glad Matson made this about a topic that doesn’t get addressed much, even if it was completely heartbreaking. Up until the end I was hoping for some kind of miracle solution … just thinking about it gets me all upset again.

Then there is the other storyline, revolving around Taylor not wanting to come back to their summer house, because she had a fall out with her best friend and boyfriend there five years ago (when she was only twelve). As you can maybe already tell by my tone, I was not entirely convinced by that story. There is some animosity and in the beginning the suspense is incredible – you just need to know what happened! Yet when we finally found out, I thought that it was rather silly to have such a big fight over something like this, especially since they were still so young. I definitely wouldn’t have held the grudge for years like some people here did.

In the end, the friendship and love-parts were a good balance in terms of making the story lighter. I don’t think I could have bared all those glum feelings all the time. It was such a heartfelt story with great lessons of facing your fears and making the best of the time you get with the people you love – and of course about second chances!

Fazit: 4/5 stars! An emotional read to get you ready for summer!

Have you read Second Chance Summer? Did you enjoy it as much as me?