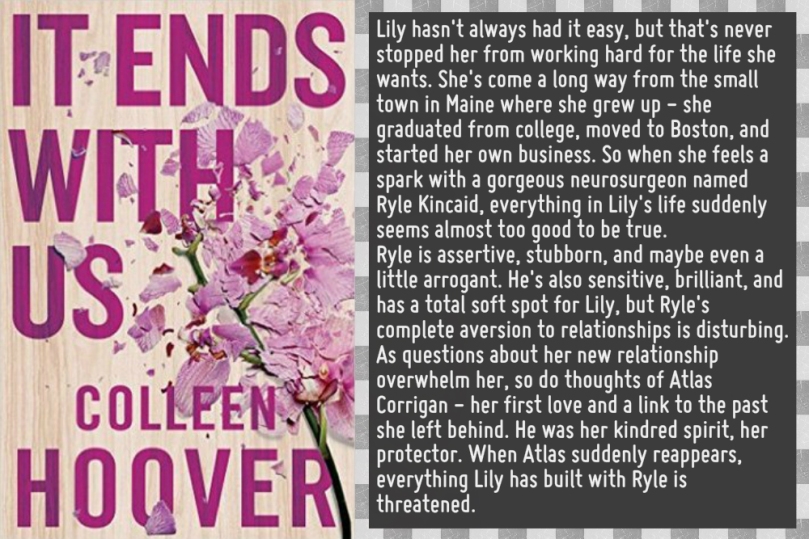 It Ends With Us was another buddy read with fellow Blogateer Cátia, She’s already a huge CoHo (= Colleen Hoover) fan, but this was my first venture into her world of writing. I am not yet 100% sure I was converted, but IEWU definitely hit home in a way. Now, before I get into any kind of detail, I don’t think I can do this without Spoilers. I’ve thought about it, but even talking about what the book’s main topic is, can’t be said without spoiling something. So, proceed with caution!

Have you ever looked at the face of someone you love and been scared? And I am not talking about scared you’re loosing them, or scared for them – I am talking about being afraid for your own safety. It irreversibly breaks something in the relationship you had. It’s something that can never be mended, but it does not mean that you stop loving them, because that’s not how this works. Lily, our main protagonist in IEWU, has to find out exactly that! Yes, this book is about domestic abuse.

In my opinion, CoHo went about this in a very smart way. She dazzles you with Ryle’s charm and looks, you fall for him alongside Lily. At the same time, she introduces you to her past, her issues with her father and Lily’s first love, Atlas, who is about to re-enter her life. All the while, you are certain, that girl will never get into an abusive relationship herself. Well, of course that’s not how the story goes. Shortly after the first incident, you are shocked and devastated. It’s the kind of incident that people try to rationalize and explain away, but no matter what the reasoning is, that doesn’t excuse it. Yet, Lily stays and it happens again and again.

I am not going to go into detail, or tell you what she did in the end, but that whole story tied my stomach into knots. I actually felt sick with what was happening, but I was very glad about the people in Lily’s life. They had her back, no matter what, especially when neither Lily nor the reader expected them to and that simply warmed my heart.

Ultimately, I really enjoyed the writing. It was beautiful and felt very real, however, there are just a couple things that don’t make it the perfect read. To me, the story was very much about Lily and her growth. I wouldn’t really classify this as a romance to be honest or at least say that was the least important part of it. So, Ryle aside, I liked Atlas and I realise how important he was for Lily’s past and that she needed closure for that, but I probably would have felt a lot better about him, if he hadn’t just turned into a picture-perfect man. What’s his story? I have so many questions about him and how he became the person he’s now. To say he wasn’t necessary in the present tense would be a vast exaggeration, but I could have done without the epilogue … Still, I whole-heartedly believe that this was not my last CoHo book! Until next time!

Fazit: 4/5 stars! It was heartbreaking and raw, but I still could have done without a couple of elements.

Have you read this one? What are your thoughts?