Today’s #CurrentlyWatching will look a little different than usually. The thing is, in the regular feature I have reasons why you should watch the show and why you shouldn’t, but I am having difficulties doing that here. I am not one for gore, violence, blood and slaying all the time. Especially when it’s really gross, I usually just fast forward, because why would I subject myself to that? Therefore From Dusk Till Dawn would not have been my go-to-choice-of-show. I am not even sure I liked the show, but I can’t get it out of my head, so this is my venting space.

From Dusk Till Dawn is a remake by the El Rey network (can also be found on Netflix) of the 1996 movie of the same title. There are 3 Seasons so far and even though it is not officially cancelled, I am not the only one who thinks that the show is kind of concluded at this point. But there still might be a mini-series, which I would very much love!

The infamous Gecko brothers are on the run after robbing a bank and taking a hostage with them. Pursued by a Texas Ranger, the eventually end up trapped in a desert bar that is nothing like it seems. All along they were part of a vampire conspiracy without even having known it. 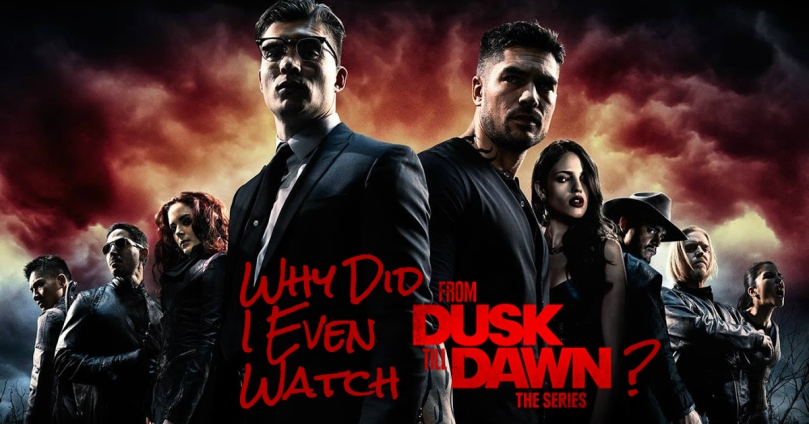 So, I need to explain how this happened. When I immerse myself in a show, I go full in (I think you’ve noticed that by now). While I was cluelessly watching my shipping videos for some random show on YouTube, they kept suggesting Kate and Seth videos and I had no freaking idea what show they were even from. The videos kept appearing so much though, that I did some research and when I found out about the show, I immediately knew it wasn’t for me. I tried like two episodes, but it was no fun.

Then came my first week of unemployment and a ton of bureaucratic stuff I had to do. I needed background noise while doing all that stuff, so I put on From Dusk Till Dawn. I don’t think I have seen the movie. Of course, I know some of the film stills, but other than that I knew absolutely nothing and therefore had zero expectations. The first season dragged a little in the first half (then again, I barely paid any attention). From what I hear it’s basically the movie spread out over the entire season, but after that I simply couldn’t stop and binged all of it in two days.

Vampires are so outdated at this point, but since they are like snake-vampire-hybrids (called culebras) here, they totally work for me. The mythology was really fascinating and I just love that Robert Rodriguez was the one to do the remake, because it’s just always better if the idea comes from someone who was involved with the original. They even managed to get some of the old cast (in different roles) to appear on the show now.

In my opinion, basically everything got better from season 2 onward – the production value and the pacing as well as the storyline! There was just so much more to discover and I enjoyed the journey the characters went through. They went full circle and that’s always a thing of beauty, because nothing is worse than dragging on with a show so long that it becomes terrible. Believe it or not, in the end I even loved  most of the characters. Which brings me to the next and to me probably most important point. The ships!

The main people this shipping stuff revolves around are the Gecko brothers Seth and Richie, good girl Kate and badass culebra goddess Satánico Pandemonium aka Kisa. From what I found out both guys are shipped with both girls (and I can definitely see why), but I like the Seth-Kate and Richie-Satánico combo best (although I stopped shipping the latter at some point). It might have something to do with me finding out about the show because of Seth and Kate but they are my favourite thing in that show and the most frustrating ship in the history of me watching horror ships. Spoiler alert: they never even kiss!

The thing with Kate and Seth is that they work incredibly well together, which lead so far that people even ship the real life people with each other (but they are just friends!!!). I am usually trying to be a relatively open to age differences in relationships, but when I found out that Madison Davenport (Kate) was only 20 and D.J. Cotrona (Seth) is 36, even I stopped to pause. It didn’t really affect me on the show though, because the characters just have a bond.

In my opinion, Seth protected Kate from the beginning, which is an odd thing to say considering that he kidnapped (and therefore basically doomed) her entire family and held them at gunpoint several times. But they became partners and Seth would give about anything to get her life back to normal, which is not really possible anymore. So, they became my new Bonnie and Clyde! YAY!

So, be cool! I know this isn’t for everyone. Any takers? Or have some of you already watched it?

13 thoughts on “#CurrentlyWatching: From Dusk Till Dawn”