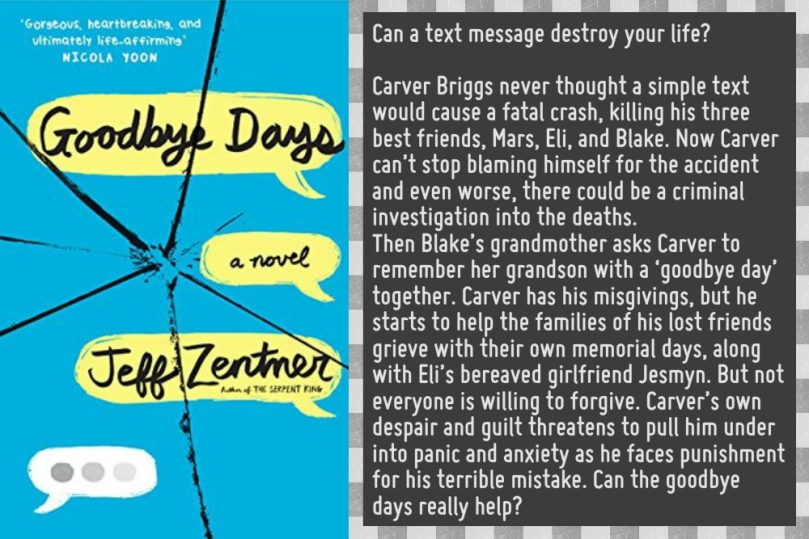 When I first saw Goodbye Days, I didn’t even know what it was about. However, what I did know was that I needed to read it ASAP! I really enjoyed Zentner’s first book, The Serpent King, so I was over the moon when I got approved for the arc now (even though I pre-ordered it before anyway) and it was even more fun to read because I had Cátia and Cristina along on the ride!

Going into a book written by Jeff Zentner, you have to be prepared for sadness. I knew this, I hardened my heart, but I still cried multiple times. While the Serpent King was more of a punch in the gut, this was like a constant cloud of somberness following you around. There’s such an important message here – don’t text while driving! It’s what starts this mess and then unabashedly portrays the devastating aftermath. It sugarcoats nothing and goes deep into the self-blame, the anxiety, the loneliness and sometimes downright panic of the situation.

I thought that most of the story was handled in a very realistic way and that it flowed beautifully. No matter how emotional or intense the book gets, it never overwhelms you. The sadness comes in waves and little punches instead, always revealing something new to you about the people Carver cared so much about and he loved those boys so very much. I enjoyed that this was a book about friendship and family, especially the parents or guardians had important roles to play and we all know how rare that is in YA these days. There might be a sort of romantic sub-plot, but it didn’t take up too much of the time and I liked how that was left in the end.

The only reason this book isn’t a complete 5-star-read for me, is that I struggled a bit with the criminal investigation. While I understand the components of guilt and blame, I just couldn’t wrap my head around the legal charges. I think it was explained pretty well, but I just don’t believe that those claims were substantial, which is also why I wasn’t entire happy with the resolution of that part. It’s really only a minor thing though, something that adds to the drama I guess.

Finally, there’s a cameo of someone from The Serpent King and it’s bit of a spoiler if you realise that person is the cameo. So, I would recommend you read the other book first, but it’s completely up to you.

Have you read Goodbye Days? Do you want to?