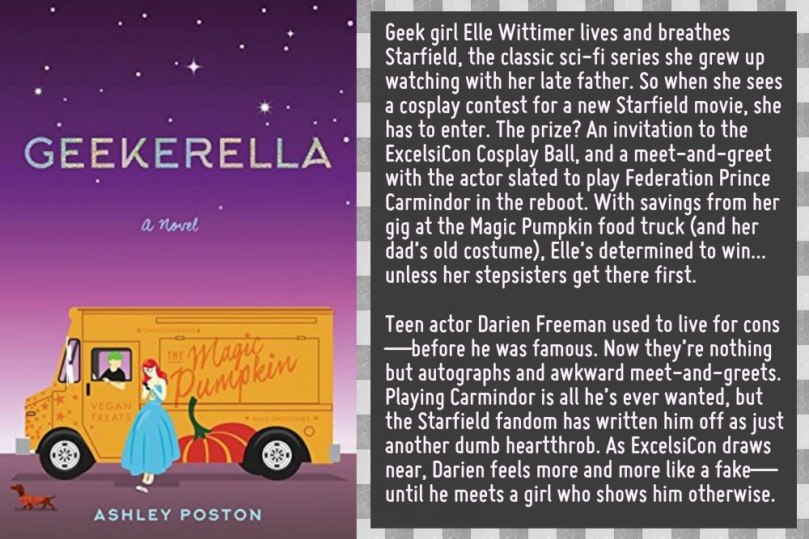 **I was provided with an eArc from the publisher via NetGalley in exchange for an honest review!**

I don’t know if you know this about me, but I am a huge fan of the Cinderella Story movies. The first one is one of my all time favourite chick flicks. Also, I am a massive geek. My ability to annoy people with the same topic (mostly a TV show/movie/actor/actress I can’t stop thinking about) is one of my best developed skills. That very same thing is also the reason I wasn’t very popular at school. Everything pop culture was always my jam, but unfortunately my fellow peers got very bored with my ramblings after a while. No one was ever truly mean to me, they all thought I was a nice girl, but we all know that “nice” can be an insult as well. It took me forever to come to terms with who I was and that I was awesome in my own right, I just had to find the right people to make my true geek-colors shine. This book just embodied all of that for me – that journey, the finding to one self, the friendships that can be found in fandoms and to be brave enough to stand up for what you believe in.

Elle is such a relatable girl to me. She’s passionate about a TV show, even if it hasn’t been on air for years, and she’s a blogger (SHE’S ONE OF US!). Generally she seemed like a good person and she didn’t deserve the treatment from her stepmonster/-sister. All she wanted was to cherish the memories of her parents and she wasn’t even allowed to do that. There were so many moments that made me really emotional. I was so glad when she finally stood up for herself, because she was so isolated and there’s only so much a person can take. I don’t know why I ever keep hoping for better reactions from the villains, but I guess I just don’t want to give up hope on them. Anyway, I was so happy when she found a great friend and unexpected allies along the way. Go Elle!

Darien was such a sweetheart even when he could be a silly dork sometimes. I liked that he was one of the biggest up and coming stars, but felt so utterly grounded most of the time. He just wanted to be a teenager and I think, he too, still needed to figure himself out (because sometimes he was acting immature). He is of Indian descent, but I didn’t feel like he was anywhere near as connected to that culture as he was to geekdom. Just like Elle, he struggled with his sense of family and I liked the idea of sometimes choosing your own family in the people you surround yourself with.

Everything just fit together perfectly in this book! The atmosphere felt authentically fangirlish and it was fun to have settings such as a convention and a movie set (although, as a film student, I know better than to believe that a big budget movie can be shot in 23 days. It takes 4-6 weeks minimum). The only reason that this isn’t a 5-star-book for me is because I found everything a bit predictable. It’s fairy tale re-telling, so that was to be expected and it didn’t take away anything from my enjoyment of the story. However, I also didn’t feel like it was something completely groundbreaking, so yeah, that’s why. I would still highly recommend it!

Would you read this book? Do you think Geekerella will warm your heart as it did mine?