This is actually happening! My weekly reviews of Doctor Who are back! I am not sure how long I can keep this up, with my Canada trip just around the corner and all, but I will do them while I still can. As I did in the past, I will review all episodes right after having watched them, so you get almost like a real time feed of my thoughts (which are subject to change). Today is all about episode 2 of Season 10 Smile and be aware that this is filled with Spoilers! 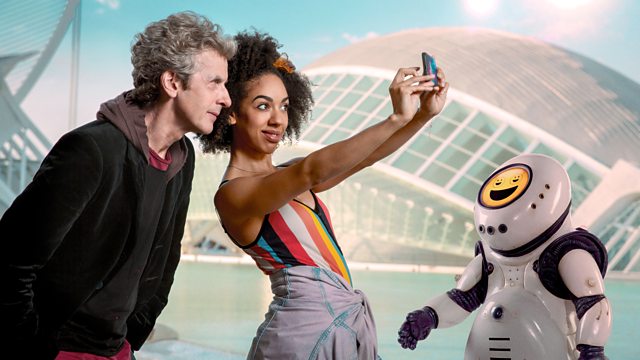 The Doctor takes Bill on her first adventure to the future, where they immediately run into misguided emojibots which endanger the last hope for human civilization.

Unfortunately, I have to say that I wasn’t particularly impressed by this episode. It’s absolutely not that it was badly executed or that the message was a bad one. After all these years, the first thing humanity resorts to is apparently still weapons. Do we not learn? Do we not appreciate other cultures and creatures? Why can we never accept indigenous people? Why do we have this need to colonize everything and make it fit us? All valid topics for an episode, but the way it was done was literally something I’ve seen countless times on the show already.

Here are a few examples of what I meant by “I have seen this before”- We have the misunderstood lifeform that actually wants to help people which faintly reminded me of Silence in the Library/Forest of the Dead (people getting uploaded in the libarary to be save) and The Girl Who Waited (letting people live out their days in kindness chambers … I mean the robots even kind of remind me of each other …), just that the Vardis actually killed the inhabitants here.

Then we have the age old question, who is actually entitled to the place? Who was there first? Who is allowed to live there? The whole “having to negotiate between humans and race XY” was only recently done in the Zygon Inversion and a while back in the Hungry Earth/Cold Blood. Just that this time it was solved super easily by resetting and wiping the robots memories. Which, by the way, was a different circumstance but nonetheless criticized just last week.

There are a couple things I do like. I quite enjoy how naturally Bill fits into the show, how funny she is and how incredibly smart. I mean, sometimes, I don’t really get her thought process. She questions things that have been unsaid for years and years of this show’s existence, but then she cannot possibly imagine what is in the pods of the human spaceship they built to find a place they could colonize? Weird in my eyes, but nothing too distracting. Bill is amazing and that’s all I need to know for now. She discovers the Doctor and his personality all anew. I love watching that realisation click in a companions eyes when they just know that the Doctor would never leave anyone behind or simply not help. She’s like a gust of fresh air again. Also, does she already have a catch phrase of sorts by saying “like a penguin with his arse on fire” whenever she sees the Doctor run now?

I am also happy about the fact that the vault-scenario is not being forgotten. I am assuming this will the story arc of this season and I sincerely hope that we will also figure out how Nardole (who was delighfully unamused at Bill’s presence in the TARDIS) will figure into all of this.

The way into next episode has already been provided at the end of Smile. The dynamic of that season is pretty interesting so far and I think it’s a decent formula to let Bill see the future and then the past in the next one. Regency England here we come!

What did you think of Smile? How are you liking the season?

18 thoughts on “Doctor Who: Smile”