Do you know the feeling when you really like a place but somehow it just isn’t a right fit for you? That’s basically my time in Montréal in a nutshell. Let’s take a closer look!

I slept in pretty long that day and was actually a little glad when I realised that my host family wasn’t here. It was my first time using airbnb and while my stay as a whole was lovely, I wasn’t prepared to live with a 3 year old whirlwind, because that was simply not mentioned in the profile … but whatever.

I picked up my friend from work. We went to a coffee shop, bought artsy post cards and talked. There’s just no way to express how happy I was to have my best friend back, to talk about random and important stuff. That’s basically how I spent most of the day and I regret nothing.

That day I met up with a girl I met from Germany, whom I had met on the bus when we both drove from Ottawa to Montreal. She was super easy to talk to and often felt like I had known her forever, but since she was alone in town, I was only too happy to “climb” Mont Royal together with her. 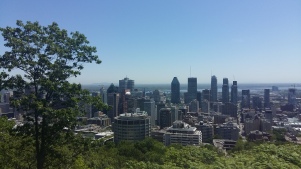 Everyone told me that it was easy to go up … well not the way we did it! We got astray several times, but in the end we always found a the things we wanted to see somehow. There is just this one time where we might as well could have stumbled onto the set of a zombie apocalypse movie. We found this seemingly abandoned clinic. Everywhere were health hazard signs and posters saying “We do not tolerate violence”. It was a fertility clinic but also a mental health hospital with bars on some of the windows. Not saying it was actually a bad place, but if felt creepy AF.

Thursday was the first day of the Mural Festival on St. Laurent. I love street art and there were a lot of people and vendors on the street, so I definitely checked that out.

Friday – Biosphere (and an unexpected evacuation)

It was my friend’s day off, so we got pancakes for brunch and then met up with one of her local friends to go to the Biosphere, an eco museum that offered free entry on that day. It was the same weekend as the Formula 1 Grand Prix though and you could hear the sound of the engines all around. Right when we wanted to go on a guided nature walk, the animator suddenly let us know that the museum was being evacuated. We still took the tour, because it was outside, but everything was still shut off when we got back … including the metro. Let’s just say I am not too fond of being stuck in a metal tube with crazy amounts of people. 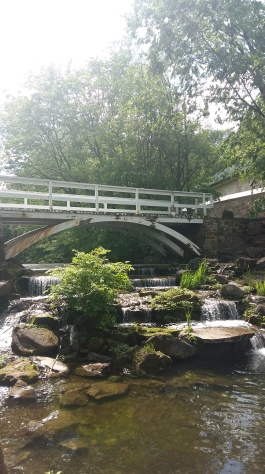 Saturday – BBQ with a bunch of French people

I got to hang out with my friend and/or her roommates all week long, but this was an event where she wanted me to meet some of her other friends. Of course I want to get to know the people in her life, but she did a banging job at befriending a ton of French-speaking people. It’s not that they couldn’t speak English, just not as great and I understood their French, but I couldn’t say anything in return. At some point the conversations were just really stifling. I did end up having a lot of fun, but it’s just frustrating when people want to convince you that Montreal is the best and that you could easily immerse yourself into the French if you stayed. Well, guess what? I just don’t want to. I am fine with everyone loving that language, but I just don’t. English is my one true love and I am enjoying myself much more in solely English speaking areas. It’s a sad fact.

It felt like time was passing way quicker in Montreal than any of the other cities before. I liked the layout and especially the area I was staying at. It was bright and lively but not in any way that felt rushed. I understood why my friend fell in love with the city, but I also knew it wasn’t for me. Still, saying goodbye would be harder than with the others before.

I parked my suitcase at my friend’s place, because I only booked my airbnb room until that day, even though my plane wouldn’t leave until Tuesday morning. We went and explored old Montreal as well as the downtown area. We did some shopping and later we went to the mural festival again as well as to eat out. It had been a long day, since the anticipation of travelling always gets to me, but we made sure we really made the best of our time. Around 11 PM, I left for the airport and it was such a long night. I was lucky in so far that I met a really nice guy on the bus, who made the wait until 7 AM (around the time my flight would leave) infinitely more easy. My brain felt like utter mush by the time I finally left. I am sure I slept on the airplane, even though it didn’t feel like it at all. When we finally touched ground in Vancouver … it weirdly felt like coming home.

How was your week? How have you been?