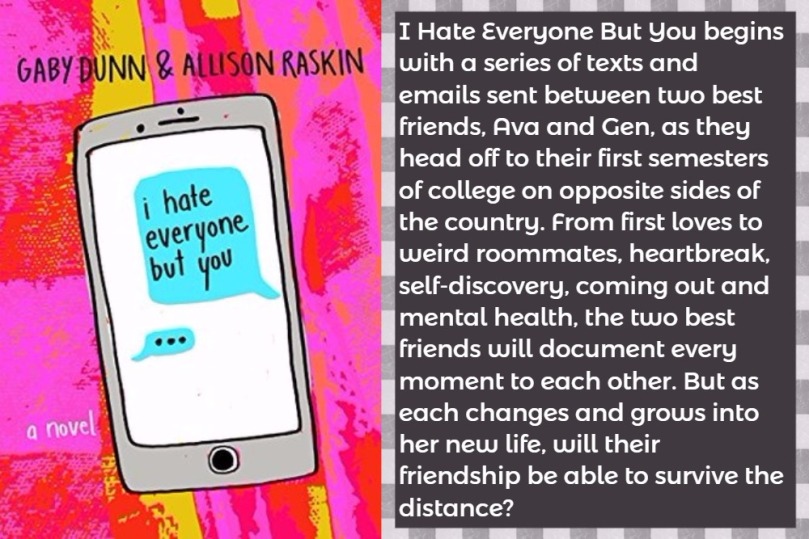 **I was provided with an eARC by the publisher via NetGalley in exchange for an honest review!**

I am a fan of Allison Raskin’s and Gaby Dunn’s YouTube channel Just Between Us (and their earlier work on Buzzfeed) and when they announced that they wrote a book together, I couldn’t wait to get my hands on it. I Hate Everyone But You is told in emails and text messages, a format I very much enjoy because it flows easily and mostly turns out to be a super fast read. From the beginning, I thought it represented both Allison’s and Gaby’s voice really well, in fact so much so that their characters seem like teen copies of themselves. Having that base knowledge of them, I felt like I understood when they joked or when they were serious about something. I definitely understand the people that were offended by some of the remarks, but I pretty much read the entire book in their respective voices and for the most part that worked quite well for me. Both, Ava and Gen, are deeply flawed in some of their ways of thinking, but at the same time try to grow (when they are not being completely stubborn and self-centered). I think they become better people because of each other, while also learning how to depend less on each other while exploring the world around them … if that makes any sense.

Having said that, I am not entirely happy with the book. They really tried to pack everything there is in this one book (approaching topics such as finding your place in the LGBTQ+ community, anxiety, depression, mental health, addiction and many more), but at the same time didn’t really have an engaging or comprehensive plotline. I am serious, if you would ask me to summarise what it was about in one or two sentences, I would really struggle to say anything more than a timid “friendship?”. I’ve read quite a couple of novels that were character driven instead of plot driven and it worked fine for them, but because of the message format, I feel like there wasn’t enough room for development and us getting to know the characters in depth to warrant such an approach. The two girls always knew more about each other than we would ever find out about them as the reader.

Ultimately it was a fun and fast read, but it could have been better in some aspects.

Have you read I Hate Everyone But You? What are your thoughts?