This week is all about peculiar and unusual shows, so I want to talk about The End of the F***ing World today. A while back, I shared the trailer for this on one of my Sunday-trailer-posts, but back then there was no talk of it also being released on Netflix yet. However, we could all agree upon it being very … strange? I am getting ahead of myself again, let’s start with the basics first.

The End of the F***ing World is a dark British comedy series, which originally premiered on Channel 4 but is now also available on Netflix. The show is based on the graphic novel by Charles S. Forsman of the same title, which I had never heard of before though. Currently it is still in its first season with 8 episodes (that are all way too short) ready to binge, but it has received quite some critical acclaim and that makes me hope that things are looking up for a continuation in the near future.

Self-proclaimed psychopath James and rebel Alyssa run away together. Each of them has their own reasons for going on the road trip, but neither expects the twists and turns their relationship will take. 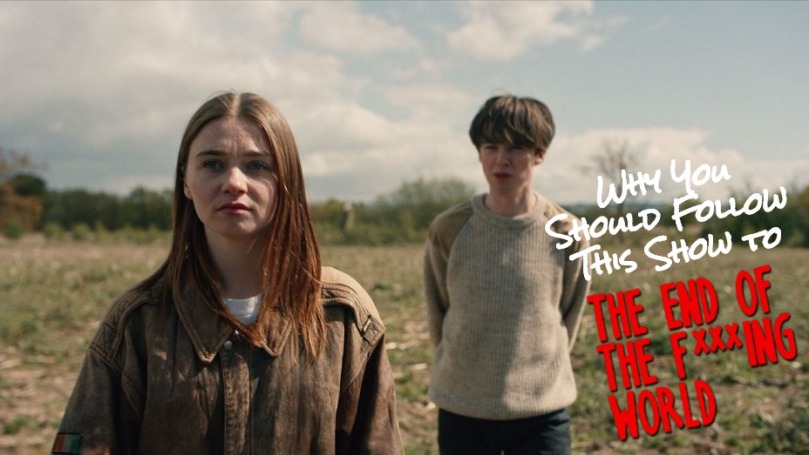 Okay, hands down, I did not think I would like this show, never mind fall in love with it. Alyssa and James aren’t exactly the super likable or relatable characters at first, however, Lawther and Barden have a way about them that portraits the characters in such a fascinating light. Aside from the fact that it’s refreshing to see actors who actually look the age they are supposed to portray, even though they are older, those two strike the perfect balance between cynicism and raw emotions. The characters have issues for sure and you can’t make excuses for their actions, but they are also vulnerable and damaged. It’s them together and their relationship that added the true magic and broke my heart over and over again.

I don’t really want to go too much into the plot. A lot happens and shit escalates to put it simply. Obviously, I wouldn’t suggest this one to the faint-hearted. I want to use this moment to give trigger warnings for murder, abuse, suicide, sexual harassment and rape. All of those are reasons why it’s sometimes incredibly hard to watch, while the show as a whole still makes you laugh with its incredibly dark humour and enraptures you in beautiful cinematography. Add an utterly amazing soundtrack to that and you know The End of the F***ing World has my heart for good.

I couldn’t stop watching. I binged the entire series when it was available in one go and felt an empty hole inside me that only comes after you’ve watched something great. Performances all around were amazing, but everyone definitely gets to show their true potential with time. So, as a recommendation, I would say stick to it for a bit after the first episodes to see what the story and actors truly hold in store.

If I had one last thing to add here, it would be that I absolutely need more. Against everything I thought this show would turn out to be, I fell hard for this story and I sincerely hope there will be seasons more to come.

Did you watch The End of the F***ing World? Did you like it? Are you going to watch it? Let’s talk!

22 thoughts on “#CurrentlyWatching: The End of the F***ing World”