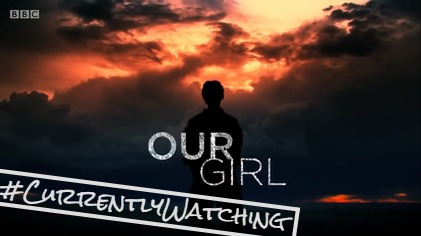 I am going to be upfront with you, but today’s theme is a bit of a stretch. I had a very clear idea of what I wanted to showcase this week, but I struggled to give them a connecting link, so “UK shows (sort of?)” is my theme. Let me explain! I am starting this week with Our Girl, which is a BBC show about the British military, so it is definitely a very British show, but I am sure it’s 90% not set in the UK because of the tours they are on and that’s why there is that question mark.

This is actually not the first time that I have talked about the show! It all started out with the 2013 movie (of the same title) about young Molly Dawes, whose life changes drastically when she signs up with an Army Recruitment Office. It was so well received that her story subsequently received an upgrade to a mini-series in 2014. There were five episodes in that season and I reviewed all of them very spoilery except for the pilot (here are the links for Part 1, 2, 3, 4 and 5). Unfortunately, there were scheduling issues with the main actress, so for season two and three the focus changed to another medic by the name of Georgie Lane. To this day, the reviews for the earlier episodes are some of my most visited posts and therefore I thought it was time to talk about the rest as well!

This is going to be a little different than usually, because I am going to show both the trailer for the movie and the TV show (for Molly as well as Georgie). It is not strictly necessary that you watch the movie before the show (I watched it later on but I understood perfectly fine what was happening in the mini-series), but I still want to include it for completion’s sake. Also, the Molly and Georgie storylines are separate, even if there are some characters that stayed the same and there are references to Molly’s life.

Both, the movie and the show, focus on how the Army can change a person’s life with a special focus on women in the military. 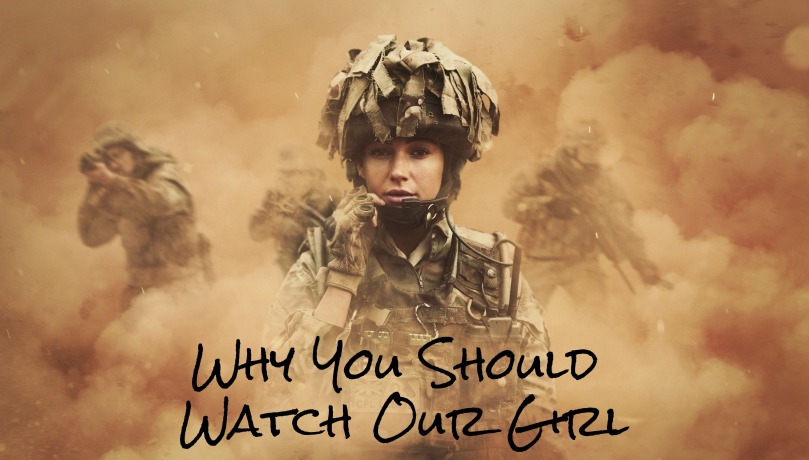 I hope I didn’t confuse you too much with my explanation of the show. It’s really a lot simpler than it might have sounded. Our Girl focuses on strong women in the military and delivers a seemingly authentic experience through and through (seen as I was never part of the military, this is just my personal feeling and not based on experience!). Even through all that, it never glorifies the actions of the military or war itself, but rather questions them and their rules.

The characters are all very likable. They are regular folks in very non-regular situations. There’s a lot of heart and personal drama that went into this franchise, but they also managed to show life while being on tour and all the different kinds of dangers the service personnel might face. However, they also show the contrast of how displaced the affected people might feel upon their return home.

It’s difficult to talk about one particular part of Our Girl, because it keeps changing focus. Each series puts the characters in a new setting with new faces and challenges all around them. As I have mentioned before, some people remain constants throughout the different storylines, but at the same time I recommend not getting too attached to anyone.

There’s a beautifully chosen soundtrack, with a new theme with each season. I feel like they got more budget for the series than they did for the movie, as it is a lot more aesthetically pleasing.

Obviously this show is about women. It’s in the title, it’s in the premise and I think it’s such an important focus as well. The women aren’t just army wives or the daughters here (although there is nothing wrong with that and those experiences carry their own struggles with them), but here the women are a vital part of the team, they are right in middle of things. I adored Molly’s character and was devastated when I first found out that she wouldn’t be returning. At this point, I have gotten so used to Georgie though, that I couldn’t even imagine the show without her. They are both strong in their own ways, not afraid to face their fears and conquer life, but there is one person connecting them and through that being that glue for the entire show – Captain James!

He is the kind of person who sticks to rules, but always takes care of his people and someone you would absolutely want in your corner when things get tricky. I don’t think there was a single person who didn’t eventually fall for him as he slowly started to open up in series 1 and I was more than happy to see that he became the constant the show needed when Molly was replaced. Through him, the story still made sense and provided that link to make it all work.

I will never forget the gruesome weeks it took until they revealed his first name and how I laughed when we finally found out. Or how he made me feel like I was in a certain coffee brand’s commercial, direly needing to try the Rosabaya flavour, even though I don’t like or ever drink coffee. Someone stop me from swooning over him all day long, please!

Anyway, this was my very rambly post about Our Girl. I feel like this wasn’t as comprehensive as it maybe could have been, but I hope my love for the show still came across! It definitely won’t ever get boring!

Do you watch Our Girl? Is it about something you are interested in? Let’s chat!

15 thoughts on “#CurrentlyWatching: Our Girl”