I am back with another theme this week and it will lead you into some “competitive environment“. I do have some more themes in store, but I think I will eventually go back to single #CurrentlyWatching posts per week, just because this is a lot of work and my schedule change and some other factors have made it more difficult to keep up with blogging. So, if there is no post on a Tuesday, you’ll know what has happened.

It should come to no one’s surprise that Greenhouse Academy is a Netflix show. However, it is based on a show from Israel that was so successful on a national level, they wanted to do an English remake (I hear that’s a foreign network’s dream!).  I can’t say anything about the original show, as this post will focus only on the Netflix version, which was filmed in Israel and produced by the showrunner of the original though. There are currently two seasons available and chances are looking alright for another season, but I gave up on predicting Netflix’ decisions about their shows (still bitter about the hold up concerning One Day at a Time …).

The relationship of the Woods’ siblings is tested after their mother’s death and their enrollment at one of the country’s most elite private schools. 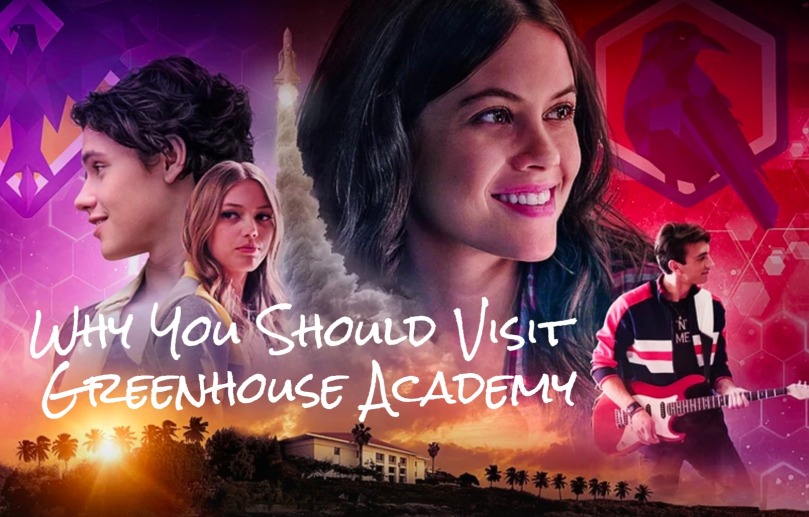 I am going to be upfront with you here, I did not exactly expect to love this show. As surprising as it was, I found it really engaging and quickly became very invested in the fate of various characters. I think the idea of having a school separated in Eagles and Ravens, basically the equivalent of sport-interested and smart kids, very much reminded me of Hogwarts Houses and the appeal of figuring out which one you could possibly belong in (Raven all the way here!).

As much as I liked the show, I am also not delusional. The acting is mediocre at best, the sets look nice but also have something very fake about them at times and the actual school made no sense whatsoever if you took a closer look. They claim to have brought up some of the most influential and intelligent people in the country, but they barely teach the kids anything and then expect them to ace tests. I am serious, when do these kids even have class? Also, the very prestigious and successful basketball team they have is just for the boys while the girls are cheerleaders? Like what is even happening? The way girls are treated in general seems very behind. In my head, I made up this entire secret life of all the school students that aren’t shown where they have female sports teams and actual classes, because that was the only way this would have made sense to me.

Having said all that, I think it’s a decent teen show, especially for a younger audience. It doesn’t require too much thinking and isn’t graphic or violent (like many other shows of more quality on Netflix), yet it offers elements of mystery (but please don’t expect anything unpredictable or realistic!) as well as love triangles and drama that will keep you glued to the screen eventually. Especially the season two cliffhanger had me on edge (WHO IS AT THE DOOR?) and I would definitely be up for another season. Yes, it is very cliché and cheesy, and there are loads of aspects that could do well with some improvement, but if you don’t take it serious, I am sure you can laugh about it and just be entertained by the ridiculous parts. Also, bonus for good music – that’s always something I can appreciate.

With all its faults and shortcomings, I really enjoyed the friendship, rivalry and family aspects of the show (parents are actually present *gasp*, but I am not saying they are all being good just because they are present). There is some slow-building romance here and there, girls supporting girls no matter what and long-time rivals who can’t stand each other but still have some real respect and concern for the other’s well being.

It’s not all sunshine and rainbows though, especially when it comes to Hayley and Alex – the main characters. At first I was really hoping for a supportive sibling-relationship, but was quickly disappointed by how easily Alex turned on his sister when it came to the rivalry between the two dorms. Hayley, who was very much distrusting of the entire Greenhouse Academy scheme, was by far among my favourite characters and only tried to be there for Alex, especially when he was bullied. I guess, when it really counts, they stick together, but I still wish their relationship had been laced with less betrayal (in the end, on both sides if you ask me).

My other faves of the show are nerd Max and rebel Jackie and their blossoming friendship. They couldn’t be more of polar opposites, but that is what makes them work so well. Max may be awkward and rambly, but he is kind and nice to people just because he can be and Jackie is not used to that. It takes her a moment to warm up to him, but then she realises that he is truly that sweet of a guy and becomes his wing-woman and shadow wherever they go. I swear, they couldn’t be any cuter and make a stellar duo! There was this one time he sets up a private screening of a movie for her, so she can do an assignment for class even though she felt ashamed for not having seen the movie in the first place. He never makes fun of her in those cases, but simply quietly helps her.

I think that is more than enough on the show for now. Have you watched it? Would you consider tuning in to it? Let’s chat!