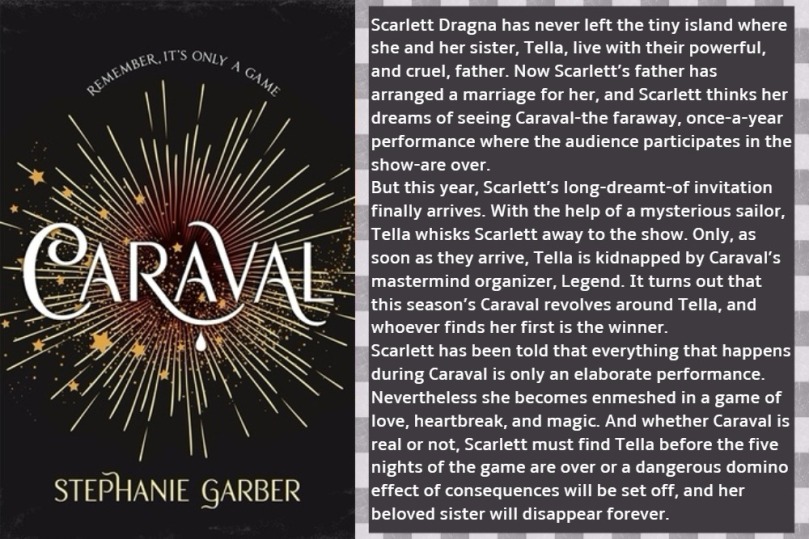 When Caraval was released last year, I remember it being all the hype. People compared it to the Night Circus, which is one of my most favourite books in the world and therefore set standards very high. I bought one of the UK mystery hardcover editions very early on, but then soon realised that the hype was just too much and there was no way I could possibly enjoy it as much as I might have if I hadn’t heard a thing about it before. So, I waited and let some time pass to allow my brain to forget some of the things it had learned and I think that was a good call.

First of all, Caraval still wasn’t close to the Night Circus. Magic was there and it might have still been very intricate, but I feel like the focus of the story was less on enchanting the readers, but more on creating drama and putting all the characters in constant peril. As a whole, I still very much enjoyed the book. The story in itself was absolutely fascinating, but my issue was more along the lines of the characters.

Scarlett and I have a difficult relationship. I appreciate her undying devotion to her sister. I like that she has principals she is unwilling to relent on, but some of her behaviour just didn’t add up. Her past is tragic and I very much understand her mistrust in others after the abuse she has suffered from her father. However, she kept making the most naive decisions and wasn’t cautious with her trust at all. After a while, I was just constantly frustrated with her choices and and the people and things she chose to believe in or not believe in for that matter. Also, she constantly criticised her sister, Tella, for being impulsive, when literally none of her actions were thoroughly thought through. Speaking of Tella, she didn’t have the benefit of being present much in the story, but despite her overall motive of wanting to save Scarlett from a life in misery, she just still seemed utterly selfish to me.

I hear that the second book, Legendary, has Tella as a main character and that it is supposedly better than Caraval. I am definitely curious about how the story continues in the sequel, because Caraval was full of wonderful twists and turns and revelations. I call bullshit on anyone who claims to have predicted everything that happened in that book, because I am usually very good at spotting those kind of things and there was no way I could have guessed all of those twists.

In the sequel, I hope that we get to go a little bit more into detail on how Caraval actually works and that we get to find out more about Legend. I like a mysterious villain who may not be a villain at all.

Fazit: 4/5 stars! Liked the story more than the characters, if that makes any sense.

Have you been enchanted by Caraval? Is it a book you’d be interested in? Let’s chat!