You all know that my love for books constantly has to compete with my love for TV shows, because in the end there are only so many hours in one day. That is why I love it all the more when I can combine those two passions and do a little comparison of a book and its (big or small) screen adaptation. I’ve previously done this for Still Star-Crossed and since I am still getting clicks for that, I am just going to assume you won’t mind more posts of the like! Today’s book vs. show post will feature Famous in Love!

The story of Famous in Love follows Portland-raised Paige Townsen on her way to Hollywood fame. She soon finds out that being cast for the main role in a YA trilogy adaptation isn’t just glamorous when she struggles to unite her old and new life, succumbs to the pressure of being a new face in a harsh industry and ultimately finds herself amidst an intense love triangle.

I am going to start with the show, because I actually watched it prior to reading the book. I usually try to read stuff before the show/movie comes out, but sometimes that just doesn’t happen and from there on it can go both ways. Anyway, Famous in Love is in its second season on Freeform. Not going to lie, Freeform and I have a strenuous relationship, because they often do very superficial adaptations and tacky content, while easily cancelling the things I actually do like (except for The Bold Type, they are doing great on that one!). I suppose that was part of the reason why I wanted to watch the show without having much knowledge about the book, since I knew they were going to change a lot. Not having any sort of allegiance the content beforehand can be really helpful in those kind of situations.

Freeform shows follow a very simple formula. Have a glossy appearance, get a mix of known and unknown actors and actresses in their early twenties and then just add drama, drama, drama at a varying degree of realism. For some formats that doesn’t work at all and for other things I quite enjoy their take. Famous in Love is definitely one of my guilty pleasures, but mostly because it takes place in the film industry and that is my soft spot.

As someone who has worked in that industry, I always like those supposed behind the scenes kind of shows. Mix it with a typical Cinderella and fish-out-of-water component and you basically have me hooked without question. I may not be the biggest Bella Thorne fan to begin with, but it’s easy to root for her character, Paige, the entire time. Who hasn’t secretly (or not so secretly) dreamed of becoming famous over night and having celebrities swoon over you?

I am a simple girl, I always favour episodes with character development and exploration of relationships over the superficial drama that comes with jealousy, affairs, fake press stories and out-of-the-blue-murder, but I guess it was to be expected with this kind of show. And even if it’s silly sometimes, in the end you just want to know what happened? So, while I do enjoy watching it as a whole, I still think that Famous in Love has a couple weaknesses. For one, the cast is quite big and keeps getting bigger, which often makes it hard to focus on anyone in particular for an extended amount of time without neglecting someone else. Also, I feel like some of the characters changed their personality quite a bit from Season 1 to Season 2 and I don’t get why exactly. None of that has stopped me from tuning in every week so far though.

One of my favourite parts about Famous in Love is the teen novel they are adapting called Locked. I want that book to be a real YA franchise so that I can dig in and read the story myself. OR I want that fake movie they are filming to be a real movie, so that I can watch the entire Locked film one day. *sigh* Those are the dreams of a TV obsessed bookworm …

Now that the second season started up on Freeform, I thought it was finally time to check out the source material. Granted, I went into this with quite a few preconceived ideas of what the story would be according to the show, but I still wasn’t prepared for the amount of actual changes.

The general idea is still the same. Paige is a nobody, but gets the role in this huge franchise. But that’s about it. Whereas the show takes place in LA, the book is almost entirely set in Hawaii. Whereas Paige is in her early twenties on TV, she is only 17 and still living with her parents when the book starts. Whereas Paige’s friends are right there with her not just in life but also in the film industry in the adaptation, they have a huge fight and grow apart while also being in different locations entirely. Whereas the love triangle on the show is between Paige, her co-star Rainer and her roommate Jake, the book’s main romance catastrophe was between Paige, Rainer and ALSO her second co-star Jordan.

Look, I am all for love triangles IF they are done well. I like the idea that one’s heart is torn between two amazing love interests, but that just wasn’t the case here. While I may have understood the slow burn approach of the Paige and Rainer relationship, which was actually really cute and developed slowly, the Jordan part was completely beyond me. Paige was downright ready to sabotage him getting a job on set, just to fall head over heels into him without saying much more than “hi” to each other for weeks.

In addition to that, the version of Locked they were filming in this scenario also sounds less appealing somehow and I don’t even know why that would be different as well? Anyway, I think that I would usually allow for the possibility of me not enjoying the book as much because of having seen the show first, but I cannot imagine myself liking this book in any other situation either.

Fazit: 2.5/5 stars! (click on the cover to be redirected to Goodreads!)

So, in the end, I would say that the TV show is vastly superior to the book and I stand by that statement. Making the characters older and a tad more mature with that, as well as setting the scene right in the high life that is Los Angeles, was a smart move in my opinion. They also created a better love triangle (whether you like them or not) than they did in the book and I will happily continue watching the series even if I won’t read any more of the books.

Do you watch Famous in Love? Have you read it? What is your take on the subject? Let’s talk!

P.S.: Shout out to the unsung heroes of any kind of production – the PAs (Production Assistants)! Or in this particular case, Adam, a reoccurring character on the show who deserves more screen time. 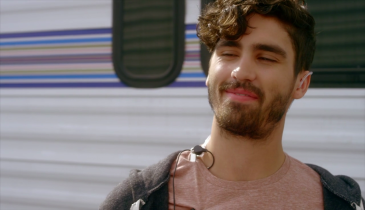