I realise that I haven’t done a #CurrentlyWatching post in quite some time, but I rediscovered the show I want to talk about today for myself after having taken a bit of a break from it. When I turned to Twitter to rave about it, I realised that very few of my friends even knew about the show, so I now want to introduce Humans to you.

This SciFi gem is currently in its third season and the stakes just keep getting higher and higher. It airs on Channel 4 in the UK and AMC in the US. Originally it is based on the Swedish fiction drama Real Humans, but since I haven’t ever seen that, I cannot attest to how close or far they are from their storyline.

Humans shows an alternate reality where humans have advanced so far in technology that they introduce robotic servants called Synths to households. The show portrays the struggles of that shift in society as well as the repercussions once the Synths become self aware. 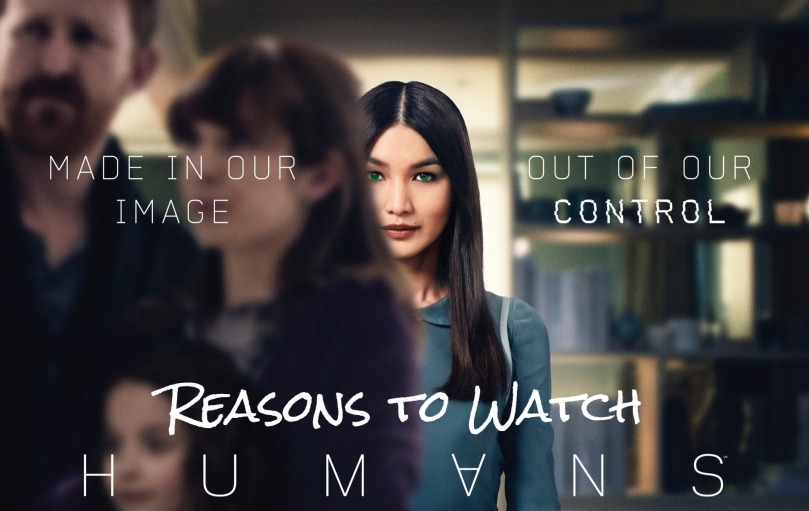 I cannot tell you what first drew me to this show back when it premiered in 2015. I think they had some very intriguing advertising that made it look like they really wanted to sell Synths to people. If I remember correctly, they even had a Facebook messenger chatbot for a while that sent you on a little adventure with a synth. No matter how I found out about the show though, it was one of the few I watched live every single week and that in a time where I stream pretty much anything after its original air time. However, I can definitely try and tell you why I stuck with it.

Humans is a show that doesn’t try to persuade you with many gimmicks. It has a higher production budget than the Swedish parent show, but it is rather quiet and eerie still. As the title promises and despite the focus on Synths and artificial intelligence as a big theme, this show really is about the human condition. How do we act when there is something in front of us that looks like us and is able to act like us, yet we are told they are merely a machine? Do we show compassion? Does our darker side win? There is something very unsettling and creepy about the whole thing, but at the same time you will be able to find yourself in multiple characters and their struggles. Over the seasons, Humans builds up and adds more complex moral questions to the story. What starts in a small household with only a specific group of Synths being conscious, soon begins to spread and becomes a global issue. I found it extremely fascinating to see the characters confronted with difficult decisions and the way they decided to deal with them. It made me question how I would act, especially since technology these days is targeted in the direction of human-looking AIs becoming a real thing.

In addition to the moral dilemmas, I was really happy with the casting! I know that the actors and actresses who were cast as the AI robots had to visit a specific Synth school to study the behaviour and mannerisms of their characters. The acting is really phenomenal on their part. But also the rest of the cast seem like good choices and realistic for their age groups as well. Over the seasons there are a couple of guest appearances and limited character arcs that I also had a lot of fun with.

It is very difficult to spotlight just one character. The main synth group the show is based around is extremely faceted and each and every one of them would deserve the spotlight for sure. My personal favourite is Matty, a badass hacker girl. I also have a soft spot for Leo, a person who is stuck between humans and synths, not sure where his alliance should lie and he fits in. However, the person who has probably gone through some of the most significant development is Laura Hawkins.

She is a working mother, an initial skeptic in regards of synths who later turns into a synth-rights-advocate. While I may not always agree with her approach to things or decisions for that matter, that woman is really there when it counts and ultimately does the right thing. She is fiercely protective of her family, but also extends that protection to others in need. She’s tough and resilient and if I ever were in a pickle, I’d want her in my corner.

I hope you got a closer look at Humans and maybe would consider watching it now? Have you already seen a couple episodes? Let’s talk about it!