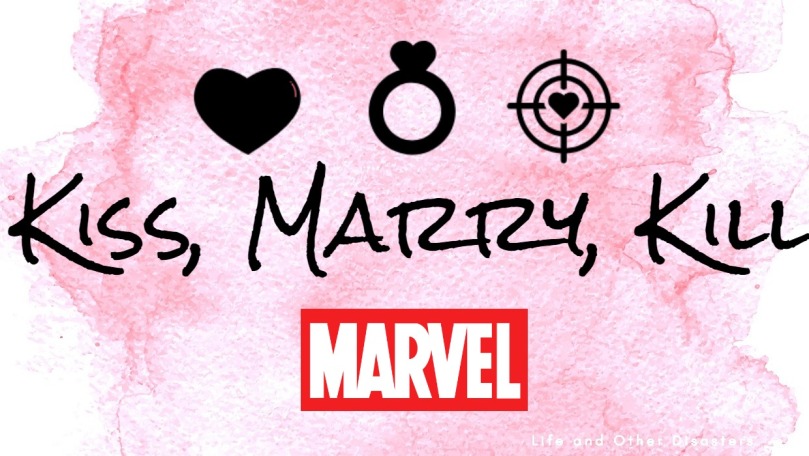 In honor of the upcoming release of Avengers: Endgame, I am breaking with tradition and am doing a Kiss, Marry, Kill tag outside of Valentine’s Day. Just in case, you don’t know what this tag includes, it’s about pitting three people against each other and me having to decide who, in this specific scenario, I would rather kiss, marry or kill.

This specific edition is based on Swetlana @The Caffeinated Bookworm Life‘s post! (She did a Fuck, Marry, Kill, but whatever …) We first bonded over our mutual love for Sebastian Stan, so when she did a Kiss, Marry, Kill for the actors and actresses of the Marvel franchise, I was all in (especially since I didn’t 100% agree with her choices). I hope this will be fun for everyone! Here we go:

Kiss: Brie Larson – *starts singing* Hello again, friend of a friend, I knew you when our common goal was waiting for the world to end … I thought she was badass since Scott Pilgram vs. the world.
Marry: Sebastian Stan – I can’t get rid of the dream I once had for two consecutive weeks where I dreamt we worked together and then also started dating. I practically had a second life with him.
Kill: Danai Gurira – I have no reason for this. I really like Danai and would not have killed anyone this round if it had been an option.

Kiss: Bradley Cooper – A Star Is Born has elevated him in my eyes again.
Marry: Zoe Saldana – Zoe is brilliant and gorgeous and why not?
Kill: Gwyneth Paltrow – I just don’t really care for her?

Kiss: Letitia Wright – *shrugs* that’s just the way it is.
Marry: Paul Rudd – He seems like an honest, fun sweetheart and I have a type. That’s it. Sweet people are awesome.
Kill: Robert Downey Jr. – I just don’t think I could handle him in his full glory!??!?!

Kiss: Jude Law – There’s a reason Dumbledore got hot the second he was played by Jude Law.
Marry: Chris Hemsworth – I would love to be with someone who talks about me with the love and affection Chris Hemsworth displays when he talks about his wife. So, I’d want to be his wife. (sound logic!)
Kill: Jake Gyllenhaal – I am sure he is a cool guy too? He just was left at the end …

Kiss: Winston Duke – what was it? M’Baku can blow m’back out?
Marry: Mark Ruffalo – Mark once stopped in his car to ask the sister of a friend, who was crying on the street, if she was alright and/or needed help. He is a truly good person and who wouldn’t want to marry someone like him!?
Kill: Tom Hiddleston – How did I get here? I adore Tom but the whole TSwift stunt was a misstep.

Kiss: Michael B. Jordan – What a man!
Marry: Elizabeth Olsen – I adore that woman! She is forever one of the people I’d like to meet and befriend and spend time with.
Kill: Chris Pratt – He already is dating someone named Kat who has a connection to Austria. Let’s not meddle with that since she’s obviously not me.

Kiss: Tom Holland – He always seems so young, but he isn’t though? Right?
Marry: Tessa Thompson – Tessa is so cool and amazing and an icon. I am into it.
Kill: Evangeline Lilly – I have no real connection to her?

Kiss: Hayley Atwell – surprisingly, I don’t really care much for this round.
Marry: Chadwick Boseman – Chadwick is cool, but he seems so tired of his Black Panther fame.
Kill: Benedict Cumberbatch – I mean, he isn’t Sherlock in real life, so I don’t know where to put him.

Kiss: Lupita Nyong’o – Lupita is glorious like the sun and she personally made sure to be included in the film adaptation of Trevor Noah’s “Born a Crime” and I admire that.
Marry: Karen Gillan – Karen is one of my favourite people ever since she was Amy Pond on Doctor Who and I also like her as Nebula and she did an amazing job with her directorial debut, even if it furthered a depressive spiral. I did a post on movies she is in, so yeah, I’d marry her!
Kill: Scarlett Johansson – I realise she lead the way for female heroes within the Marvel universe, but for some reason I don’t particularly like her.

Okay, it was a little weirder than I thought it would be to do this for the actors/actresses rather than their characters, but what do you think? Can you relate to my choices or do you think I am insane? Both? Neither? Let’s chat!