We all know that I haven’t exactly been reading up a storm these past couple of months. Even when I have been interested in the different stories, it was just hard to find the time and energy to really focus on it and keep at it. However, this book was offered for free on Kindle and is told entirely through letters (one of my favourite forms of storytelling if you remember this post), so I just couldn’t resist.

Evidence of the Affair feels like such a simple story, but managed to really get across a lot of emotion in its limited amount of pages. It’s always such a shame when I connect with a short story and then just want it to go on for 300 more pages. And that’s not to say that this book had a terrible ending at all, it was quite fitting and yet, it still left a lot to the imagination. I think that I would have personally preferred just a bit more, but I’d like to imagine that the next thing happened away from letters and notes and that makes it all the more beautiful in my mind.

Carrie and David’s struggles were so relatable throughout, I just wanted them to lead their best lives and be happy too. Even as someone who hasn’t been in a long term relationship, I could understand their doubts and fears.

Often, I feel overwhelmed by this sinking feeling in my heart that I will never be enough.

But those characters were definitely enough and their short story was too. I am a greedy reader, I always want more, but this is a great book if you need a change of pace or a quick way out of a reading slump.

Fazit: 5/5 stars! This is the perfect little palette cleanser and story to wet your appetite for more reading.

Have you read this little nugget of a story? Would you like to? What are your thoughts?

When I was little, I used to love to listen to cassettes of fairy tales and little audioplays (not really something that was just narrated, but rather had an ensemble cast play different characters and such) as I was falling asleep. Those stories were often intentionally short, because I was a child and my attention span probably wasn’t the greatest to begin with, but they were also easy to follow in terms of story. Now, being much older (but not necessarily wiser), I thought it was time to try actual full length audiobooks.

There’s been a lot of discussion online about whether audiobooks should be considered real reading and that’s not even something I ever worried about. Of course, to me, if you have heard the story, it counts just as much as if you have read the words on the page. Also, it’s just a bit ableist if we are being honest, because not everyone can see and read words. So, this is not what this post is about at all.

This post is more about how I personally feel about audiobooks and why I think they do or don’t work for me. I found myself having two credits for free audiobooks on Audible and went with very different options to test my theory – one was a contemporary thriller (I wasn’t quite ready to dive into anything that was removed from reality) and the other was a non-fiction book by a British comedian. Here’s a bit more on those books:

Something in the Water by Catherine Steadman 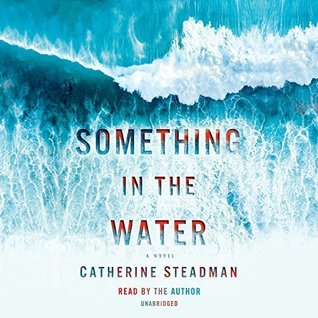 Something in the Water is a thriller that starts out with a seemingly regular woman burying a dead body in the first chapter and you subsequently find out how she got herself into that predicament.

If you’ve followed my blog for a while now, you know that I am not huge on thrillers or crime stories. However, I was a bit overwhelmed with the sheer amount of possible audiobooks, I wanted something new and as soon as I saw Catherine Steadman and that she narrated her own book, I just pressed the “buy” button.

For those of you who don’t know, Catherine Steadman isn’t just an author, she is also an actress (currently starring as Eliza Gestalt in The Rook) and because I knew her and her voice, I was intrigued. With audiobooks, it’s important that you like the voice and intonation of the narrator. With Catherine, I knew that she would be great due to her acting abilities and that she was invested in the story too. Alas, I was not disappointed in her narrating skills. The story is another thing though …

I was so annoyed with the main character sometimes. It’s not that she was a bad person, but she made some really dumb decisions. Also, it’s pretty much a cautionary tale on what greed will get you. Anyway, my main issue though was that I simply couldn’t keep paying attention to the story and kept spacing out even if it was interesting. I learnt that I listened the most while I was walking around outside and didn’t do ANYTHING else, but had troubles as soon as I so much as glanced at my phone screen or attempted an activity that required as much as a single brain cell. So, I figured, maybe I needed something even more rooted in reality and turned towards non-fiction with my next book. 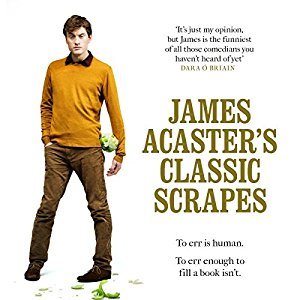 James Acaster is one of my favourite comedians. This doesn’t necessarily mean much, because that list is pretty long (I like to laugh, okay!?), but it made getting his audiobook an easy choice. He obviously also narrated the book himself, which is probably best, since it’s like him telling short stories that happened in his life. The foreword is by Josh Widdicombe, also a funny dude, so what’s not to like?

Well, I knew some of the stories from James’ stand up program and his various visits on panel shows. Also, I once again just really had trouble not getting distracted. So, if a comedian with a funny accent and funny stories couldn’t hold my attention? What did that say about me?

I think in the end I just have to accept that maybe audiobooks aren’t for me. I have real troubles focusing on what’s being told to me and I learned that I just prefer having the words in front of me. There is a consideration of maybe reading along AS someone tells me story, but I don’t have the funds of buying an audiobook as well as an ebook or physical copy. I am not that rich! It was worth a shot and I do get people who enjoy audiobooks. It’s so much faster to get through a book, but I can honestly say that I did not retain as much information from what I read this way than I did when I read the actual letters myself.

What’s your take on audiobooks? Do you like them? Do you loathe them? I’d love to hear your thoughts!