Every year, there is one of these book vs. TV show comparison posts among the most popular posts. I am so very glad you are enjoying them, because I so very much enjoy writing them. It’s been a while since I talked about this show, but here we go! I hope I remember everything correctly!

Diana Bishop, historian and reluctant witch, doesn’t realise that the book she just requested at the library will change her life forever. The volume has been lost in history, but for her it appears and reawakens magic she never knew she had in her. Now being sought out by the entire magical community, she finds herself enthralled with the supposed enemy, vampire genetecist Matthew Clairmont. As they slowly warm up to each other, it turns out their connection is far deeper than anyone could have foreseen.

There was a lot of controversy when the show first aired, because how dare anyone release something in Europe months before it is coming out in the US. I, for one, didn’t think it was such a big deal, because what do you think anyone outside the US has to deal with when it comes to books, TV shows and movies 90% of the time? Anyway, my point is that there was a lot of buzz before it even aired and seen as it wasn’t on any of the traditional networks or streaming services, I feel like that was a good thing.

When I started that first episode, I was immediately enthralled with the show. The cinematography is one of the most beautiful ones out there, the pacing is slow but without making it seem like they are dragging things out and the chemistry between the main leads is just on fire. I will admit that the romance felt cheesy or like it was developing too fast and too intensely, but I just as equally have to say that I didn’t mind? There was a magical connection between them and as you go along with the show (or book for that matter), you’ll notice that Diana and Matthew were inevitable. So, yes, you do have the cliché vampire who stalks the pretty girl, but you also have a fascinating magical system behind it to back it all up. Lastly, I also really enjoyed the way they incorporated science into it all!

Another thing I really liked about the show was the fact that you didn’t just get a glimpse of the main couple and their lives, but all the minor and major characters that surrounded them. It made for a better whole picture and while there are still a lot of unanswered questions, you can see why certain characters did the things they did. Especially the daemons get a whole lot more attention on screen than they did in the books, where it mainly revolved around vampires and witches alone.

The show was renewed for season 2 and 3, which likely means they will film the trilogy as it was in the book, since they also stuck to the storyline of the first volume for the first season. This is good news, because it will mean that there will be a proper ending guaranteed. 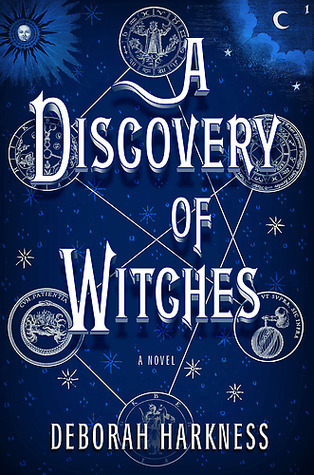 Contrary to the show, the book is entirely told from Diana’s perspective. That is not necessarily a bad thing, but it left the motivation behind certain characters’ actions up to your imagination, while I prefer knowing how things come to be that way. Especially when we are talking bad guys, I like them to be more layered than just plain “I prefer the old way and that’s why you can’t do what you want to do” behaviour.

Still, overall I struggled a little bit with the book. It could stem from me not being used to long and detailed storytelling anymore (it’s a whopping 594 pages filled with different languages and historical accounts as well as architectural observations), but I also found Matthew’s and Diana’s behaviour a little more irritating. In that universe, witches are wild and stubborn, while vampires are territorial predators. It is like that in the show as well, but I feel like they managed to tone it down and made it less aggressive traits of the characters.

The beginning wasn’t adapted to the screen very faithfully, because there definitely wasn’t any vampire yoga class (which I found silly), but the second half of the book felt very accurately represented. There are still some changes that I am intrigued about, because they didn’t seem minor to me, but since the show continues, I am not worried it won’t be addressed. However, there was a certain magical ability, that I don’t want to spoil, featured on the show and I had hoped that I would find it more comprehensive once I read about it, but I still don’t understand it. Seen as they literally described it, I find it frustrating that I wasn’t able to grasp the concept fully. I still have so many questions.

Fazit: 3/5 stars! It took me about a year to finish the book, because some of the descriptions were tiresome and the characters felt a little more irritating to me, but in the end, I was just as intrigued by it all as I was with the show.

In general, I believe the show found a way to bring the book to life in a graceful and comprehensive way. There are a couple of plotholes here and there, but they aren’t limited to the screen adaptation in my eyes. So, I prefer to watch it all unfold beautifully, than to be confused by overly detailed descriptive text.

Have you read or watched A Discovery of Witches? Did you enjoy it? Let’s talk!

6 thoughts on “A Discovery of Witches: Book vs. TV Show”