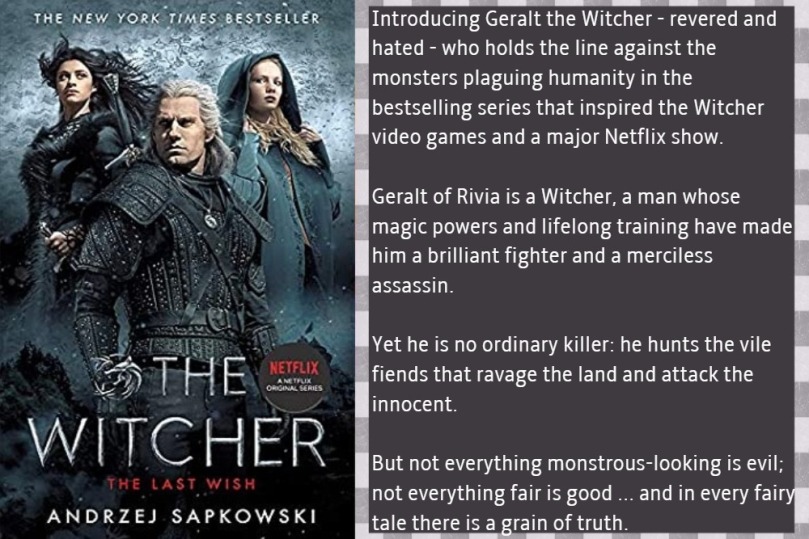 It is a well known fact on this blog that I very much like the Netflix adaptation of the Witcher (it made a surprise entry into my favourite shows of 2019 list, because I couldn’t stop watching it upon its release). However, before that, I never played the games and honestly didn’t even know that the books existed. The Last Wish was originally published in 1993 (my birth year, or as I like to call it, the best vintage) and just completely escaped my notice until now. Upon closer inspection, it turned out that The Last Wish wasn’t a Witcher novel but a Witcher anthology instead, with everyone recommending to read it first. That truly explains a lot about this book!

Much like the show, you have to be prepared to not really know when things are happening and what their connection is. Reading The Last Wish, I felt like the show had done a great job, as I could clearly identify the contents of episodes 1 to 5 (not necessarily in that order) within the pages. Some character names were changed (why is Dandilion called Jaskier on the show?) and some might not have appeared yet (or will never appear at all?), but I think I had a grand advantage having watched the show before reading the book. I was prepared for the jumbled up timelines, for the messy tasks Geralt has to perform and for the characters that slowly crept into his heart.

I was especially surprised by the nonchalant mention of several well known fairy tales (such as Cinderella, Beauty and the Beast, Rapunzel, Snow White, Rumpelstiltskin, etc.), because they weren’t just tales within that universe, they actually happened there (even though in an even more sinister way than most remember it). Some got their own chapter, others were just mentioned in passing, but the inspiration was very clear behind the use of those characters/tales. That really made me think that Geralt was always just a village away from all the nighttime stories I knew so well from my childhood. A strange thought, a bit of a funny one too, but also a befitting one for it helps build a familiarity with an utterly different world.

“Evil is evil, Stregobor,” said the witcher seriously as he got up. “Lesser, greater, middling, it’s all the same. Proportions are negotiated, boundaries blurred. I’m not a pious hermit. I haven’t done only good in my life. But if I’m to choose between one evil and another, then I prefer not to choose at all.”

So, if you pick up The Last Wish, you will find a series of tales introducing Geralt to you. He will show his true character and keep you guessing at what kind of massive mess he has gotten himself into. It ends on such note, that you will want to know more about the (in this version not THAT stoic) witcher and the trials that await him. It’s exactly what was promised on the cover! However, you should not expect a traditional story with beginning, middle and end. There are hints at something that spans greater for sure, but it’s just really not what The Last Wish is.

I am definitely intrigued and would pick up further novels. My only problem for now is that I am an absolute cover snob and this is the only one Netflix has released with the TV show cover and I would like matching ones. There are about eight or nine books in total though, so I feel like the show still has a lot of material to draw from and will hopefully release the other books with the tie-in covers as well!

Fazit: 3/5 stars! Definitely worth a read if you are a fan of the show (or games too, I suppose)!

Have you read any of the Witcher books? Have you played the game? Loved the show? Let’s chat!

20 thoughts on “The Last Wish by Andrzej Sapkowski (The Witcher #0.5 Book Review)”