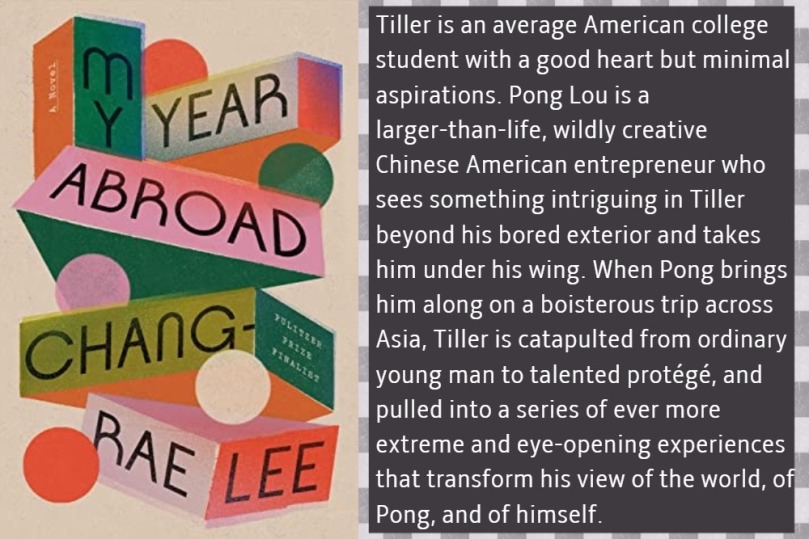 In the breathtaking, “precise, elliptical prose” that Chang-rae Lee is known for (The New York Times), the narrative alternates between Tiller’s outlandish, mind-boggling year with Pong and the strange, riveting, emotionally complex domestic life that follows it, as Tiller processes what happened to him abroad and what it means for his future. Rich with commentary on Western attitudes, Eastern stereotypes, capitalism, global trade, mental health, parenthood, mentorship, and more, My Year Abroad is also an exploration of the surprising effects of cultural immersion–on a young American in Asia, on a Chinese man in America, and on an unlikely couple hiding out in the suburbs. Tinged at once with humor and darkness, electric with its accumulating surprises and suspense, My Year Abroad is a novel that only Chang-rae Lee could have written, and one that will be read and discussed for years to come.

Let’s get it out of the way. Unfortunately, I was not the right reader for this book.

I had been very eager to pick up this novel, because of my own experiences abroad. Be it during my formative High School years or later on in life, every time I went to a different country for a longer period of time, I learned something about the world, about people and most importantly myself. No matter where I stayed, it changed me and taught me valuable lessons. I cherish those experiences and thought it would be a great connection to this story. But no matter how hard I tried, I constantly found myself losing interest.

Told between alternating timelines of now and the adventure that got Tiller to his present situation, I couldn’t always quite make the connection between the different scenarios. I felt that the story was disjointed and didn’t evoke the emotional effect I had hoped for. The journey abroad and its aftermath were so important, yet Tiller doesn’t even leave his country until about 40% into the book.

While everything Tiller describes has a purpose, it’s still hard to follow him as he finds value in situations you wish he had never gotten into. I don’t think anything ever goes smoothly when you set out for something potentially life-changing, but where he found himself along the way was among the worst that could happen. There are some clear themes around parenthood, taking action (which Tiller does very late in the book, mostly being an inactive protagonist who things happen to rather than someone who makes things happen – but that’s all part of the journey!) kinship and the privilege of certain opportunities. And yet, I still couldn’t always grasp the fondness for certain people and experiences I would have rather never thought of ever again, while Tiller had them on the highest of pedestals.

Ultimately, I think that this style of writing just wasn’t for me. I can see many literary fans rejoicing in the details, but I found myself drifting off mid-sentence as the descriptions became ever more elaborate and lengthy. In general, this book was just too long, offering pages of minute details of various foods and drinks or other things, just information on top of information, but not the connection to me as a reader I really sought. I am certain others will be able to appreciate Lee’s craftsmanship and skill more than I could.

Fazit: 2/5 stars! Unfortunately, My Year Abroad failed to capture me.

Have you spent some time abroad? What was it like for you? Can you see yourself picking up a book like this?