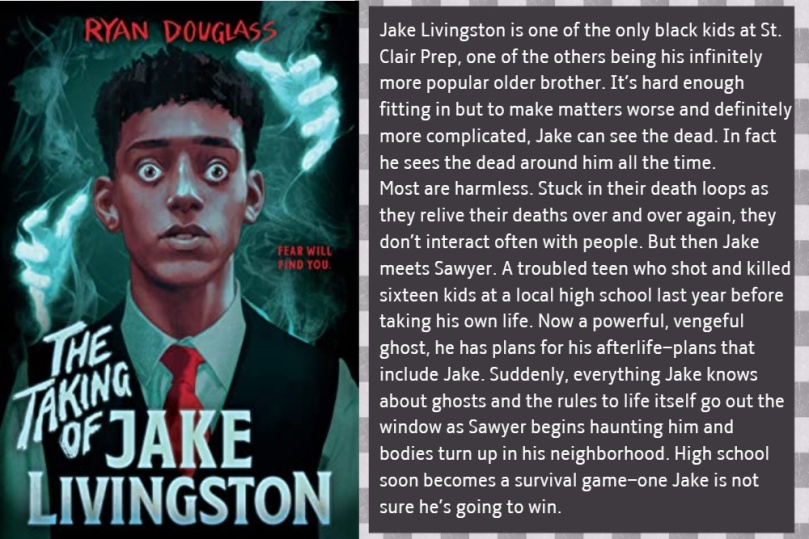 Ever since I saw the cover for this book (shout out to Jessica Jenkins, who designed it, and Corey Brickley, who did the cover art), I knew I had to pick it up. Horror is still a new-to-me genre and I’m slowly easing myself into it, unsure where I truly stand on it, but I have no regrets reading The Taking of Jake Livingston.

While it may seem short, The Taking of Jake Livingston packs quite the punch. From the get go, Jake’s narration style mixed with the diary entries from Sawyer manage to create great tension and suspense. Although Sawyer gave me the creeps, I enjoyed how reasons for his behavior were explained but not excused. I felt like it was really easy to connect to the teen voices, which were casual but also had some really beautiful lines included. I was barely a couple pages in and I wanted to know everything that had happened and was about to happen.
I have to say that you barely get a breather while you read, with heavy topics such as abuse, racism, bullying, etc. being around every other corner. It became quite a lot at some point, but, at the same time, perfectly portrayed Jake’s dire circumstances. He was about to be stripped of everything, even his self, and you really felt that along with him. All of that made the lighter moments, especially those with Fiona and Allister, who were like bright spots in the ever-growing darkness, all the sweeter. I often wished they had been featured even more prominently, just to give Jake someone to lean on, although I understood that wasn’t the main plot.

Despite the heaviness and the gruesome scenes, some of which had me in literal tears, the book does end on a hopeful and lovely note. I don’t know if I could have handled a glum ending, but I was really pleased and even happy at what I got. This was a story about ghosts, control and letting go of things/people that hurt you, but it was also about self-acceptance and even queer Black love. While the romance surely wasn’t the main plot, the author managed to incorporate it perfectly, making it something that eased the heavy parts without ridiculing what was happening.

In the end, I was impressed by how much intensity could fit into such a “short” book. Some parts felt a bit disjointed and rushed, lacking consequences at times, but the discomfort and creepiness of some scenes will continue to haunt me. I’ll try to just think of the nice ending instead …

Fazit: 3.5/5 stars! Gripping and haunting story you will surely fly through!

Do you intend to pick up The Taking of Jake Livingston? Are you interested in YA horror?