I really want to make use of this feature a bit more in 2022, as I don’t think I can always provide a full length review, but there’s still books I like to talk about. This time, I want to focus on two very beautiful novels about Black joy, love and pain. In no way is this post meant to pitch the two against each other, but rather shine a light on both! Let’s dive in! 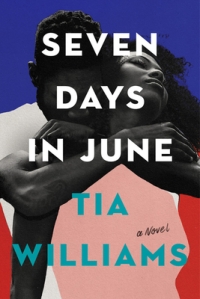 Publisher desrciption:
Brooklynite Eva Mercy is a single mom and bestselling erotica writer, who is feeling pressed from all sides. Shane Hall is a reclusive, enigmatic, award-winning literary author who, to everyone’s surprise, shows up in New York.
When Shane and Eva meet unexpectedly at a literary event, sparks fly, raising not only their past buried traumas, but the eyebrows of New York’s Black literati. What no one knows is that twenty years earlier, teenage Eva and Shane spent one crazy, torrid week madly in love. They may be pretending that everything is fine now, but they can’t deny their chemistry-or the fact that they’ve been secretly writing to each other in their books ever since.
Over the next seven days in the middle of a steamy Brooklyn summer, Eva and Shane reconnect, but Eva’s not sure how she can trust the man who broke her heart, and she needs to get him out of New York so that her life can return to normal. But before Shane disappears again, there are a few questions she needs answered …

Reese Whiterspoon really knows how to pick ’em, because this was also one of her book club picks (I’ve previously read Daisy Jones & The Six as well as Where the Crawdads Sing)! So, far I’ve enjoyed everything I’ve read that she has chosen, even if not everything has become a favorite of mine. That’s what I call good taste and a definitely a way to get me interested in future novels that she endorses.

From the get go, Tia Williams’ voice is engaging and reels you in. I can’t remember the last time I read a prologue that got me so hooked, while I can also really commend the epilogue (as well as the whole story in between, of course). Add the setting in the world of literature to the great writing style and you have my whole attention. I don’t know what’s up with that, but I’ve read two books about writers, who express their feelings about each other through their stories, in a row and I love it.

“One thing,” she whispered, her lips by his jaw. She didn’t want anyone to overhear. “Before I forget.”
“What’s that?”
“Stop writing about me.”
Only Eva could’ve noticed the change in his expression. She saw the flinch. The slow, satisfied curl of his lip. His bronzy-amber eyes flashing. It was like he’d been waiting years to hear those words. Like the girl whose pigtails he’d been yanking during recess all year had finally shoved him back. He looked gratified. In a voice both raspy and low, and so, so familiar, Shane said, “You first.”

Over the course of seven days, you will fall in love and get your heart broken by our leads, Eva and Shane. Somehow their story is tragic, they face so many struggles and while all of that hits you emotionally, the writing never gets too heavy. You feel their past weigh on their present, but there’s also plenty of humor and joy to offset it. At the same time, this is not just about romantic love, but generational trauma, self-realization and motherhood. Truly a beautiful balance of topics and emotions in my opinion.

Definitely give this a go if you are into second-chance romances!

Fazit: 5/5 stars! Engaging, funny as well as emotional – it took out all the stops! 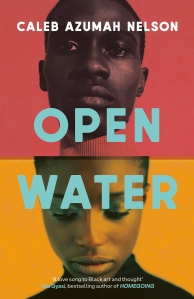 Publisher description:
Two young people meet at a pub in South East London. Both are Black British, both won scholarships to private schools where they struggled to belong, both are now artists – he a photographer, she a dancer – trying to make their mark in a city that by turns celebrates and rejects them. Tentatively, tenderly, they fall in love. But two people who seem destined to be together can still be torn apart by fear and violence. At once an achingly beautiful love story and a potent insight into race and masculinity, Open Water asks what it means to be a person in a world that sees you only as a Black body, to be vulnerable when you are only respected for strength, to find safety in love, only to lose it. With gorgeous, soulful intensity, Caleb Azumah Nelson has written the most essential British debut of recent years.

Meeting a person you just click with, someone you can be your most vulnerable self around (until you can’t) – it’s rare and it’s beautiful and it’s what we get to witness in this book.

“It’s one thing to be looked at, and it’s another to be seen.”

Written in a second person POV, the style of writing takes some getting used to. We never learn the names of our protagonists, but hash glimpses of their lives, growing connection and the inevitable limitations of unconditional love. Some things you just don’t want to unburden, ultimately closing you off from the person who only wants the best for you.
Despite it’s short length of 145 pages, this book took me several days to finish. In all its poetic beauty, Open Water is quite heavy as it illuminates some of the more terrifying aspects of the Black experience.

“You have always thought if you opened your mouth in open water you would drown, but if you didn’t open your mouth you would suffocate. So here you are, drowning.”

Everything about this novel feels deeply personal and will have your heart aching. There’s many great references to music, films and literature, making it feel relevant and timely. I can only say that the impact of the introspective writing will last and linger much longer than the size of the book might suggest.

Fazit: 4/5 stars! Beautiful heart and gut-wrenching, but possibly not for everyone.

Have you read either of those two books or do you plan to? Let’s talk!