What is better – the book or the movie? It’s an age old question that we bookworms ask ourselves and I’m happy to share my perspective on the novel Along for the Ride by Sarah Dessen as well as its Netflix adaptation. It’s been a while since I’ve done a post like this, but I hope you’ll love diving into this as much as I did reading, watching and now writing the post for it.

Ever since her parents started fighting and eventually divorced, Auden hasn’t had a full night of sleep. She did, however, do everything that was expected of her. Got good grades, excelled in academics, attended her mother’s soirees rather than hang out with people her own age … forgetting to be a kid/teen in the process. Now, it’s the summer before college and Auden decides to spend it with her father and stepmother in a quaint beach town. What promises to be a carefree summer proves to have more challenges in store for her, especially after meeting fellow insomniac Eli. 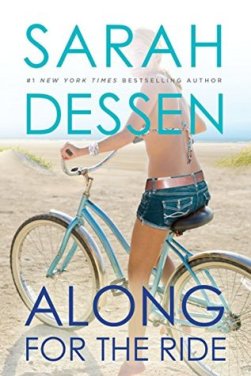 Some of you already know this, but Along for the Ride was my first foray into the writing of Sarah Dessen. My expectations were pretty high, just because so many of my friends and fellow bloggers have gotten lost in and fallen in love with her stories. I can confidently say that I devoured and enjoyed the book, but that I was also painfully aware that this was written more than a decade ago.

The way “girly” things were constantly put down and judged, even after some growth on several characters parts, just really nagged me. A lot of Auden’s POV was very much along the lines of “I’m not like other girls” and that was honestly quite frustrating. I’m not saying that this doesn’t happen in books today at all, but I think we’re more aware of that kind of internalized misogyny and try to avoid it.

Auden was hard to love at first, but it made sense in the context of the story and how she was raised. I loved seeing her warm to the people in her life and while her love story with Eli was cute, I preferred her interactions with her stepmother, Heidi (I did not and probably never will like her biological parents in the book). I also appreciated that Auden’s friendship played a huge role in the book. In general, the teen romance came second to the parental struggles for me. I don’t know if that has something to do with my age or because I thought that these conflicts were better developed, but those were definitely the emotionally hard-hitting scenes. Complex family structures will forever be my jam.

Still, Eli is a big part of the picture and something about their late night adventures just really appealed to me. I wasn’t a very adventurous kid myself, even though I’m sure a couple people would like to disagree on that, but something about the way their relationship came to be satisfied a yearning within me. Nonetheless, I kept wishing to know more about Eli. To maybe follow his perspective every once in a while to truly understand his pain.

Rating: 3.5/5 stars! True to the story, I stayed up way past my bedtime to finish reading it.

*For more information on the book, head over to Goodreads or Storygraph!*

When the movie started, for the first ten minutes or so, I was certain this was going to be a super faithful adaptation and I wasn’t sure how I felt about that. I liked the book alright, but I knew that it wouldn’t hurt to update a lot of the material. The longer I watched though, the more changes I noted and … I think most of them are for the better?

The main story still stays completely the same, barely anything major differs from the source material, but a movie only gives you a limited amount of time to tell a story and Along for the Ride is on the longer side of YA fiction. There had to be some decisions made and I’m on board with most of them. Here are the most notable ones:

I really loved this movie. It made me miss being by the ocean, which is a general state of being for me, but was amplified here. It made me want to go on adventures with strangers in the night and made me reminisce when I did some stupid stuff when I was younger.  Due to the time constraints, there wasn’t as much depth and exploration of the family troubles, but I think that Eli got a better third act instead, which was maybe also necessary.

I still would have liked to dig deeper on some parts. I don’t want to say that relationships were rushed, but I definitely felt like I was connected more to the characters because of my knowledge from the books rather than what I learned through the movie. Maggie, for example, is beautiful and warm in the movie, but I think that I knew her even better in the books. She’s a key figure, but we definitely don’t harp on her story as much. I’d still watch it again in a heartbeat though!

As a last note, I just have to say that this was some really perfect casting! Everyone was exactly how I envisioned them to be, down to little mannerisms. Kudos to the casting director!

For me, the movie is a winner. I missed some of the deeper emotional bits from the book, but much of the things that annoyed me were changed for the better and I have to give credit for that. Sofia Alvarez (who adapted the book for the screenplay and directed the movie, but was also involved with TATBILB) knows how to transform books into lovely movies.

Do you agree with my assessment? Have you read and/or watched Along for the Ride? Let’s talk about that!

Join 3,924 other subscribers
Follow Life and Other Disasters on WordPress.com