We’ve covered the top movies and books of 2022, so now it’s time for the most extensive post – my top TV shows of the year! Usually, I’d split this one up into two different posts, one for the TV shows that have been running for a longer time and one for the most recent releases, but I’ve really tried to contain myself. It’s fairly long still, but I did my best to narrow it done. Be prepared for a bunch of honorable mentions!

This list will feature all the shows that had their sophomore year and beyond. I just can’t help myself, but put them in these categories.

Sanditon could have easily been ruined. Most of their leads left after the show was initially cancelled and then revived. They had every chance to fail, but somehow made me really invested in Charlotte’s new endeavors and all the other characters lives. Well done!

Devi used to be able to annoy me a lot, but she has grown so much during the past seasons and I loved seeing that growth. And it’s not just her, the others – especially Paxton – had their own moments of maturity as well and I was here for it. Honestly thought that this was the best season thus far.

I’ll admit to it. I have no problem in doing so. I am an Eddie Munson stan as well. I’m not saying he was the only good thing about the season – far from it – but I get the appeal and I do miss him still. Stranger Things has its strengths and weaknesses, but when we don’t focus on Mike and El, actually have the gang be together – it’s still one of the most engaging shows at the moment. Although I will never understand why we had to split it in two parts.

2. Only Murders in the Building (Season 2)

I wasn’t sure I was still going to like Only Murders in the Building after the first season. There were a lot of cameos I wasn’t exactly excited about and I thought that the format might get stale, but they pulled it off. Now I’m on team Theo and Mabel and hope it will happen. Who would have thought he’d become one of my favorite characters? (It’s actually not very surprising, I don’t know why I said that.) 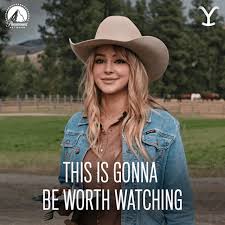 I’m cheating, because I’m putting old and new shows in here, just so I don’t have to make them compete in the new release category. I’ve fallen down a hole of cowboy shows and I have never been happier. There’s not even plot sometimes and I know that annoys people, but it calms me down so much to just watch cowboys at work for five minutes straight without anything else happening. These shows get so violent and brutal sometimes, I think someone described them as trauma porn even, but overall, I find them relaxing. I think something’s wrong with me.

I thought I was going to be so bored just watching a bunch of “pioneers” make their way through North America, but Elsa Dutton is an icon. She’s a child, don’t get me wrong, not always the most mature or knowledgeable, but she felt everything with her whole body and soul and didn’t give a damn what people thought of her. For that time? That’s commendable.

They got people like Harrison Ford and Helen Mirren to star in TV show (as a couple no less), which is exciting in itself, but somehow I’m in my Spencer Dutton (played by Brandon Sklenar) stan era and I have no regrets. Taking place 40 years after the show 1883 ended, we still have Elsa narrating the tragedies her family faces. It’s a weird clash to suddenly see horses alongside cars in town, but I’m very curious where we’re going with it all.

Here’s some more shows that I enjoyed continuing to watch in 2022.

2022 brought us an onslaught of new shows that were fun and exciting. Not all made it (and I have a post dedicated to shows that were cancelled too soon, which you can check out HERE), but I’m still here to celebrate my faves.

The Bear is a show that stressed me out so much. I think it brought back all the trauma from working in the food/hospitality industry growing up, because I did not enjoy that. I loved how real it felt though, gotta give them props for that! I’m very excited for the continuation of the show, even if the showrunners don’t want to see the romantic potential with their leads … it’s never good to just ignore natural chemistry.

I know that the og Heartbreak High has a special place in many an Australian heart, but I adored this reboot. I was really bummed that not more people watched it and that it’s still in renewal limbo. Out of all the Gen Z shows I’ve watched in 2022, this one felt like it was the most honest and authentic. Also … very Aussie. I like that.

You’ve seen me rave about 1899, which was from the makers of Dark and promised to take us on another wild ride. Well, as Netflix likes to do, they disappointed us all by not promoting it properly, not giving it time and cancelling it, despite the 3-season-plan of the creators. I hate it here sometimes.

Also, the making of for the show was incredible! The technology we have these days, I had no idea.

I did not watch this show on a weekly basis while it was all hyped, I instead watched it on my own without talking to anyone in the midst of winter. Not going to lie, it took me bit to get into it, but it ended up just being mindblowing. In the beginning, I thought I’d love to sever my brain from work, but THE IMPLICATIONS! Never thought about it like that and it’s … wow! Can’t wait for more.

The Sandman is magical! There’s just no other way to describe it and I think it’s fair to say that “The Sound of her Wings” is one of the single best episodes of television I got to watch. For that one alone it had to be ranked fairly high.

1. Interview with the Vampire

I’m all the way back in my vampire phase, because I am being fed! This adaptation was brilliant and complex and so beautifully done. I mean, THE NUANCE! I cannot wait to see what they’re going to adapt the Witches of Mayfair. Only a couple more days until I get to see it.

Other Shows I Enjoyed

Narrowing it down to just 6 shows (which is a weird number for an end-of-the-year-ranking anyway) was hard. So, have some more!

And last but not least, here are some shows I THOROUGHLY enjoyed, but feel like that went completely under the radar for most people. They were up there among the best and deserve a special spotlight.

What did you think of my favorite shows of 2022? Did we watch similar stuff? Is there a show I missed out on? Let’s chat!