There’s a lot of content I’m excited about releasing this and next week, so I wanted to make sure I update you on the stuff I’ve watched lately before I dive into those new and shiny things. Let’s go!

Romance isn’t everything. I was in a really weird mood when I started this show and them telling me about the average number of relationships a person goes through and so on just knocked me down even more. I don’t have any relationship stats to share. I don’t have an epic (or even lame or otherwise) love story to tell and sometimes watching those shows that hyper-focus on the way to finding “your person” hit me in the feels especially hard.

Having said all that, it wasn’t a bad show after all. I really liked the ending, although I struggled with some episodes in the middle. I found Darby and her behaviour quite cringey from time to time and struggled with massive secondhand embarrassment from time to time. But you know what? I like that she wasn’t the perfect person. She had flaws, she needed to grow and sometimes things just don’t work out the way you want them or planned them to. I can appreciate a show that doesn’t portray it all through rose-tinted glasses.

For fans of: introspective love stories, realistic portrayal of not everything being happy all the time, complicated family structures

I had meant to watch this for the longest time, but didn’t feel like reading and concentrating on subtitles. My Spanish is not good enough to go without them and I’d really recommend this show without dubbing (although it exists). Anyway, finally watched it!

I have to say, I didn’t enjoy this season as much as the first one. The villain was less defined and therefore made everything feel a bit all over the place. One of the biggest parts/problems of the season completely went over my head and I now feel stupid. It’s like everyone had to give up on something to help Carmen, just for them to get all of it anyway and yeah … did not get it.

However, I was here for the various romance storylines. Kobo and Alicia in particular are star-crossed over the centuries and I love that. And while I wasn’t to happy about Esteban being sidelined, Carmen’s new love interest has my attention.

Katie is one of my favourite fictional characters and that’s just that. I wish for everyone to have a Katie in their lives and I want to be someone’s Katie. This show has given me so much joy and even though it seems super bubbly and bright and like something that would run on the Disney channel or Nickelodeon, but it has talked about some great and frankly deep topics over the seasons. I cannot speak to the realism of the cancer portrayal, but the way they handled panic attacks meant everything to me.

I loved the ending to the show! It was wholesome and sweet and heart-warming. Without wanting to spoil anything in particular, I just want to say that I am going to ship Aidan and Katie forever. That’s just a fact now (and he better find an art college to attend in NYC). If they decided to do a special on them in college or after college, I’d tune in to it, but I also get ending it where they did. I am really happy with it all.

For fans of: bestest of friends, looks like a superficial Disney show but has amazing in depth topics

It was Chris Evans birthday and for some reason I hadn’t watched Gifted yet, so I remedied that. I don’t actually have very much to say about it? It’s a good movie, because I enjoy complex family dynamics. I like when it’s not obvious what the right thing is for a child (although I felt it was fairly clear here) and the main party struggling to make all the right choices. Obviously, Chris Evans is always a joy to watch, so, go for it?

Did you watch any of those things as well? Let’s chat!

Being home sick has given me plenty of time to watch stuff (I was basically ordered to do so by my doctor, so who am I to decline that suggestion). So, let’s see what’s been on my screen:

I thought this was going to be so stupid and just like Happy Deathday, but Russian Doll is one of the most brilliant shows I have watched as of late. With a short 4-hour-binge, you will be taken into a world of weird but excellent acting, formidable script-work and a beautiful range of characters. It is so much deeper and complex (but still fun!!!) than I expected. It’s like an existential life crisis dramedy and I had no idea that was even a thing.

I want to say that it wraps up pretty nicely. I am not sure if this is supposed to be a limited series or not, but I wouldn’t be mad if it ended here. In fact, I believe a second season might ruin it … And just as a little inside tip from me, stick with it until at least episode 3.

In the end, I just sat there and I wanted to hug all the characters goodbye. What an amazing journey they took me on! 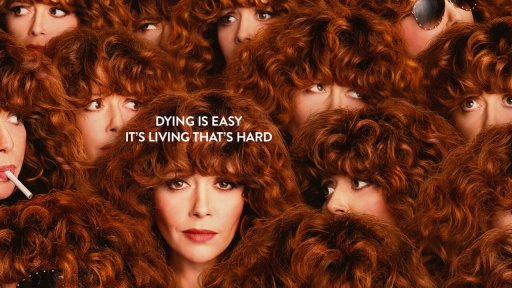 You know that I love contemporary witches, but I also very much like witches that are fish out of water because they’ve been transported to contemporary times. This was such a fun show and I keep appreciating all the international content on Netflix. This one is set in Colombia and I watched it in Spanish with subtitles, I believe that’s the best way to get the experience right.

I will say that it was very hard for anyone to root for Carmen to be able to go back to her original timeline. In the 1600s she was a black slave who had fallen in love with her white master’s son, but in our time, she had so much more possibilities for her future. As soon as she had felt at home in the 21st century, you just knew she could never again be content with her old life, but at the same time she was unwilling to give up on her love. Without wanting to give away anything, there is a lot of room to explore more of that in a second season.

Not going to sugarcoat it, I called a lot of what was happening with the baddies on the show. Not all of it, but enough to not be seriously surprised. There is a very teen drama soap feel to some of it, but I don’t mind that at all. It’s just something to think about if that’s maybe not your thing.

This isn’t really a new one, but I just felt like bingeing it all again, especially season 2. The cases on this show are so over the top and there are so many too. You might think that they go to one accident per episode or a max of two, but no! This is more like 5+ every single episode, while still giving us plenty of personal relationship stuff too.

I just really wanted to watch it again, because I am into the Eddie and Buck ship, which is not canon but I don’t even care. They could just have a beautiful non toxic male friendship as well and I wouldn’t be mad about that either, but they’d make a cute couple too. The writers even admitted that they were throwing crumbs at the viewers but I am not sure if they are queerbaiting the audience or not. They do have a canon lesbian couple, which is already pretty awesome. But yeah, the guys … one of them has a son and a random lady thought they were both his dad and told Buck what an adorable kid they had and he didn’t negate her. He just took a beat, smiled and thanked her. COME ON!

I never religiously watched the original Carmen Sandiego, but I remember it from my childhood and this new style of animation wasn’t exactly what I wanted out of a reboot. The voice actors are all doing a great job though and the story was interesting enough. I just believe that this is targeted at a younger audience than me and I found myself bored sometimes.

Overall, not a bad show, but I also don’t have a lot to say about it either. If you can’t find anything else to binge, this isn’t too bad of an option I suppose.

Have you binged any of these shows? Do you intend to? Let’s talk about it!