Honest question: Why has no one told me about this book before!?!?

I’m definitely not the most up to date person when it comes to book releases, but after reading the marvel that is Soulswift, I can whole-heartedly say that this book deserves more attention. I’m going to do my very best to not spoil anything for you, while still trying to convince you to pick up this book in the near future!

First off, I want to point out that Soulswift is a standalone fantasy, which is a rare bird to come across anyway (pun fully intended). So very often, you have to brace yourself for multiple volumes to release over an extended period of time to get to your conclusion, but somehow Bannen managed to pack a fully formed story, neither rushed nor dragging, into this one single book. I am in awe of that woman’s writing!

Stories about faith, even made up ones, are never easy in my opinion. There is such a fine line between religious fanaticism that feels harmful and a naivete towards the world and other beliefs that might be frustrating and annoying at times (although it didn’t feel annoying to me here), but offers great potential for growth. Bannen allowed us to draw our own conclusions, hearing different aspects and exploring the various angles. It felt very natural for the world she created and I loved that I knew that there were always going to be three sides to the belief system: Gelya’s version, Tavik’s story and the truth.

Why should I worship something that cares so little for me, or for you?

As I moved through Soulswift, I found myself attached to Gelya and Tavik more and more. Their enemies to friends to lovers dynamic and banter was endearing like nothing else, but they were also great characters on their own accords. They both have to overcome a vast amount of prejudice and yet their bond is so strong and frankly beautiful. You will weep for these characters, without a shadow of a doubt, because they are so strong and dedicated and devoted. By the end, it’s just a question of who to.

Aside from really enjoying the religious aspect, the created world and the characters, it was the small things that made this novel stand out for me. It challenged gender norms and stereotypes without throwing it in your face, but rather letting the characters question their world view through dialogue and realistic situations. For example, I cannot recall another Fantasy novel where a character got her period while on the road, which wasn’t dismissed here, but also not made into this awkward big deal. I really appreciated that!

Life and Death
All things in balance.

Why wouldn’t this book be for you?

Aside from the topic of faith, which might not be everyone’s cup of tea, be it fictional or not, the ending isn’t something every reader will love either. I’m fully in the camp “a good ending doesn’t mean a happy ending”, but if you seek a story that will leave you warm and joyful, this is not it. I’m not saying it ends it utter devastation, because everything makes sense and is very beautiful in its own way, but also tragic. So very tragic and sad. I cried.

Could I convince you to take a look at Soulswift? Was it on your radar before? Let’s talk! 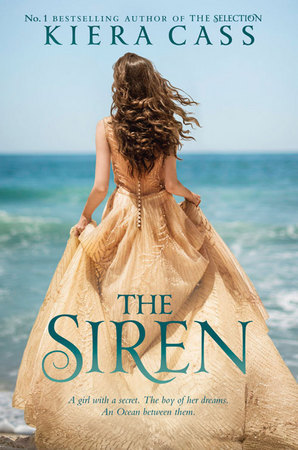 A girl with a secret. The boy of her dreams. An ocean between them.
Throughout the ages, the Ocean has occasionally rescued young women from drowning. To repay their debt, these young women must serve for 100 years as Sirens, remaining young and beautiful and using their deadly voices to lure strangers into watery graves. To keep their true nature secret, Sirens must never speak to humans, and must be careful never to stay in the same place for too long. But once her century of service is over, each Siren gets a chance to start over – a chance to live the mortal life that was almost stolen from her.
Kahlen is resigned to finishing her sentence in solitude…until she meets Akinli. Handsome, caring, and kind, Akinli is everything Kahlen ever dreamed of. And though she can’t talk to him, they soon forge a connection neither of them can deny… and Kahlen doesn’t want to.

I don’t know why, but I had all the wrong ideas about this novel. First, I thought it would take place in any other time than the present tense and second I thought it was part of a series – oh, how wrong I’ve been! The Siren is a lovely modern day, mythological standalone romance and so far my favourite Kiera Cass book.

The life of a Siren is isolated with nothing but her Sisters to talk to – and I mean that. Sirens really cannot talk to anyone else or they would kill them. The Ocean is their mother, employer, friend and provider all at the same time. I loved how big of a part She was of the story and how beautiful, yet also cruel and almost godly She seemed, without me ever being able to fully understand everything that encompassed Her. She is definitely not human and it shows sometimes. The Sirens live to serve Her, but 100 years are a lot and everyone takes to the burdens differently. Yet, them having to share this duty, lead to them creating this very deep bond with each other. There are not many books with female friendships that are prominent and work, but here the individuals all had their part to play in forming their lovely little sisterhood. And they were truly all their own person, with different interests and characteristics, yet all strong in their own way.

I liked Khalen. Her style, her old-fashioned way of thinking – it just worked for me. I truly felt like she was the one who took her “job” serious, but who simultaneously was weighed down by it the most. She felt responsible for everyone and I could see how that dragged the others down but also made her necessary for the group. However, I am a little torn about the love. It wasn’t exactly insta-love, but she did fall for Akinli incredibly fast! I tried to justify it with her not being able to connect with other humans in forever, but it still was a rather otherworldly bond they had. Then again, that is exactly what made it so great, because sometimes it’s just nice to see people clicking with each other like that. My heart tore for Khalen, especially because I could see her pain so clearly in front of me.

One thing I kept wondering about was the language the Sirens spoke in. Was it English? Because how could that be possible with all of them coming from different parts of the world. There were little holes in that and also in the mythology itself, but I was willing to overlook it. The only thing that really bothered me was something I can’t say or you’ll be spoiled, but it had to do with a new Siren.

I feel like there is still a lot to say about this book, but I want you to experience it yourself. In the end, I really enjoyed the melancholy, the sadness as well as the cheesiness of it all. It is weird to think that it was Kiera Cass‘ first story and no one wanted to publish it back in the day and only the persistence of the fans made it possible. This is clearly a love story, but somehow it was also about guilt, duty, friendship, family and motherhood, sometimes even more so than romance. I am both sad and glad about the fact that this is only a standalone, because the ending was perfect. If it ever got turned into a movie, I think it would be very The Age of Adaline-ish and I’d love that, too.

Fazit: 4.2/5 stars! Despite minor flaws, this was a perfectly melancholic tale about love and the Ocean.

What’s your take on the story? Would you pick it up? If you’ve read it already, do you like it better than the Selection series as well?